Oudamxay, in Northern Laos, was never on my must visit list when it came to planning our trip. And that’s most probably the case for a lot of travellers. But at only three hours by local bus from Muang Khua it was a convenient place to stop and for me to rest up before continuing on to Luang Namtha. The lack of tourists, and all the infra-structure that goes with tourism, provided a fascinating insight into Laos city life. 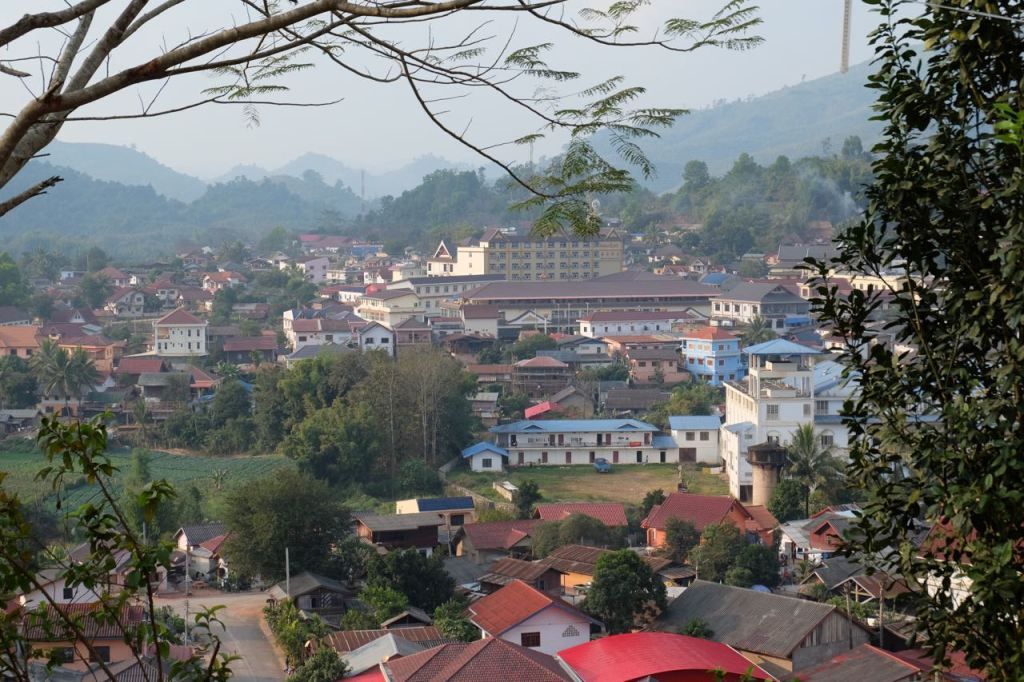 Oudamxay is mainly a trade centre. It’s close to the Chinese border and it shows. Many of the signs are in Chinese as well as Laos script. (I’m showing my ignorance here – I don’t know which particular Chinese language.) According to the Lonely Planet 25% of the population is Chinese.  And we wondered if the towns on the other side of the border might in fact be very similar. 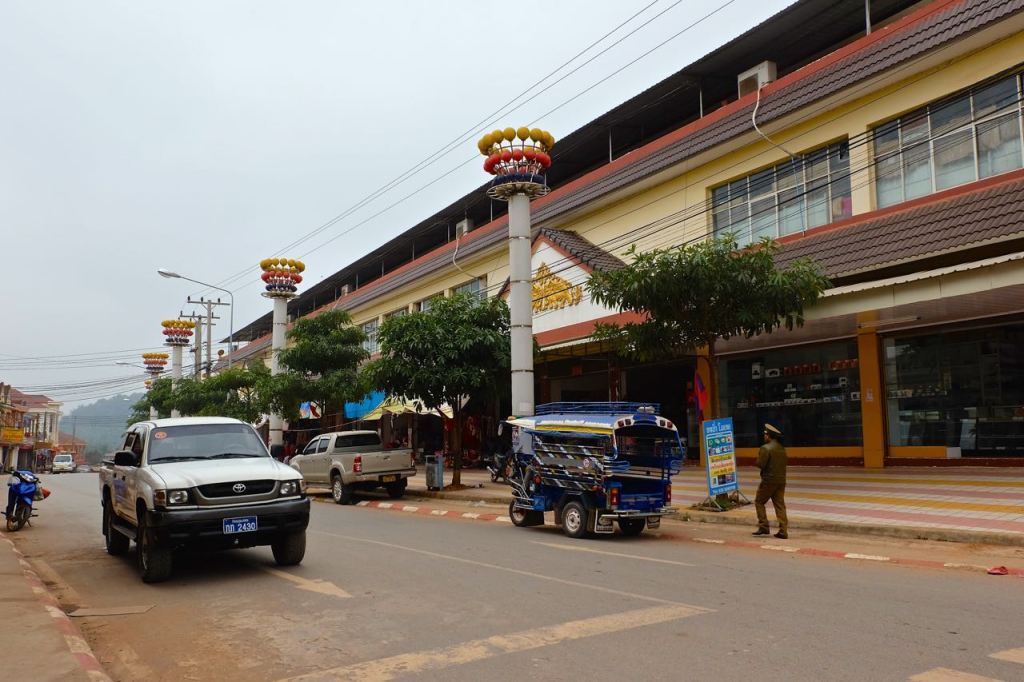 The street near the morning market

There’s a bit of hustle and bustle, and a definite rush hour between 3:30 – 4:00pm as people begin to head home and the women light the cooking fires for the evening meal. As with elsewhere in Laos many families cook their meal outside over wood fires or braziers – often on the street itself. And, if it’s possible to tell by looking, it seemed that many lived on their work premises, gathering to eat together in the shop front or workshop.

And as with the other places we’ve visited there is a lot of construction. Our Guest House was building a large extension, there was a smart new hospital which, it turns out, is Chinese built and has excellent Chinese doctors but is private and expensive. It’s unlikely to be affordable for most local Laos people. There was a very large and brand new sports stadium, American built, apparently with the aim of addressing drug problems amongst the youth. I couldn’t imagine the kids I saw playing on the street actually using the stadium but perhaps there’s a plan to help that happen.

We saw few tourists and fewer Europeans. John went for a walk while I slept, again, and reported back that the town seemed to have a strong industrial and educational focus – in other words an ordinary town without the gloss we often see pitched at tourists.

I mustered up the energy to check out the new Buddha and Wat at the top of the hill above our Guest House. It replaces one that was destroyed by bombing during the Indochina war. As is the case with most towns in Northern Laos, Oudamxay took a pummeling. 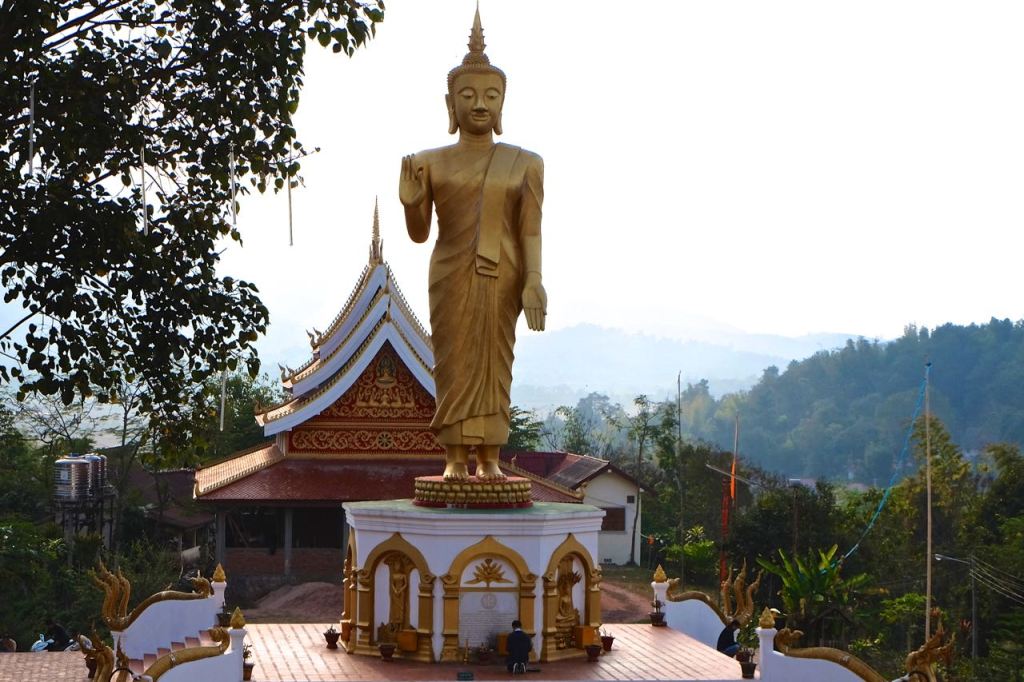 Buddha above our guest house

We had to have our wits about us as we wandered around. We were looking for a restaurant in the evening when I had to pull John back – there was a huge gaping hole in the footpath immediately in front of him. He’d have fallen into the storm water system or, more likely, the sewer. This wasn’t unusual and we learned to watch where we placed our feet.

I could have talked for hours to some people we met who worked for an NGO aid agency. Their insight into Laos, the challenges of providing aid, and the challenges facing Laos in the immediate future were fascinating. I’ll talk more about that in a later post.

Perhaps it was the recovery mode I was in, or our relative ignorance about how things worked, but I found it difficult to get anything to eat other than noodle soup or stir fried rice. Neither of which I particularly fancied at the time, especially as they all seemed to be loaded with MSG.  Or that’s how it seemed to my temporarily rather delicate taste buds. I craved pineapple but couldn’t find any. But we did find a stall selling coconuts. In my weakened state I was shocked to find the thing heavy to hold. But not impossibly heavy. I did manage to scoff all its contents and I reckon that was the turning point in my recovery.

We passed through again a few days later, on our way to Pak Beng. That night we found a family run Chinese restaurant. There was no menu. Instead we were shown to the kitchen where Mum, Dad and the children were all busy preparing food.  From their gestures we figured out we were expected to choose the ingredients for our meal. What a challenge. I recognised minced chicken, pak choy and a type of mushroom so I pointed at those which caused gales of laughter from the cooks.  But it all looked delicious and very fresh.

We were both starving and waited hungrily. What arrived was a large pot of tea, a huge amount of deep-fried pork, two plates of pak choy and very large servings of the mushrooms which had been tossed in oyster sauce with green peppers and a gigantic bowl of rice. There was easily enough for four! No wonder they had laughed so much at us. It was as delicious as we’d hoped and we made very decent inroads into the servings, but there was no way we could finish it all. 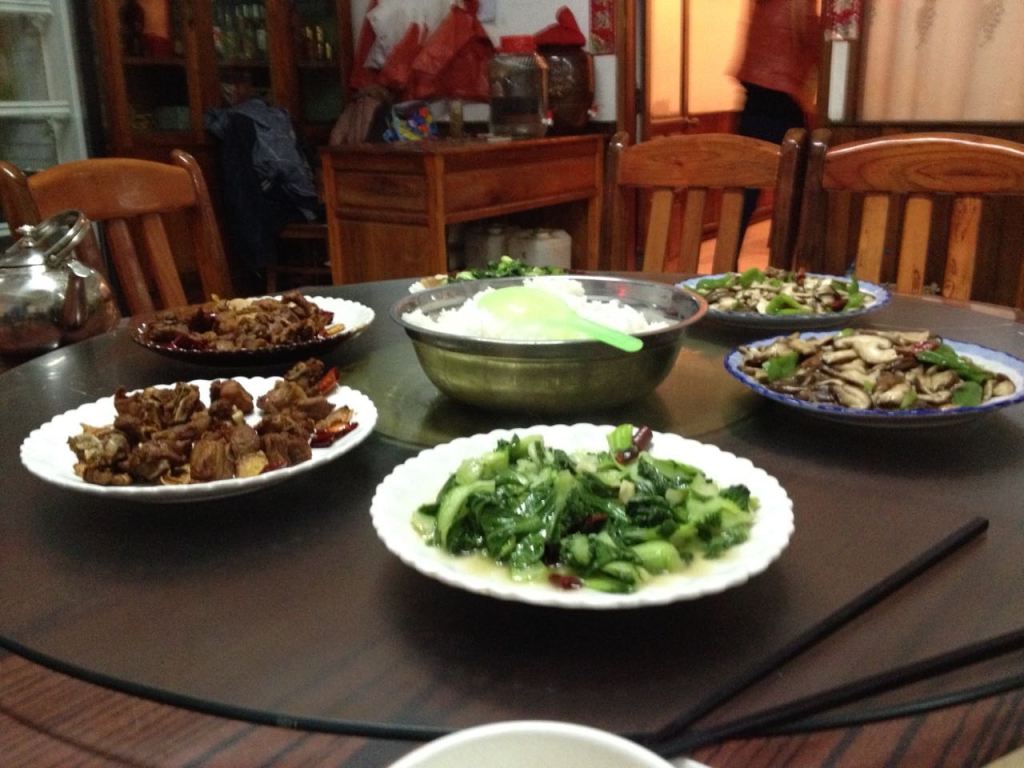 Way too much food but very delicious!