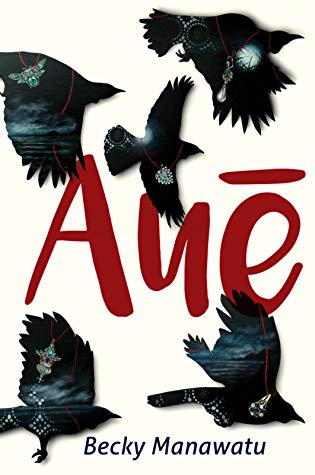 Auē is a term which doesn’t easily translate into English. My Māori/English dictionary defines auē as to cry, howl, wail, grown, bawl, but I don’t think these quite get it right.

The cry  “auē”  comes from the very core, from somewhere beyond the solar plexus.  It’s a cry that acknowledges the power of the life-force, it’s a wail that expresses the agony of losing those we love.

And it’s the perfect title for this book, Becky Manawatu’s debut novel. Auē is raw, it’s confronting. Auē is loving. Auē, a cry in to the darkness, a cry that in the end brings forth light, and redemption.

The telling of the story is shared between the  Ārama and Taukiri, and then Jade and Toko. And Aroha.

Ārama  and Taukiri’s parents have died. Taukiri, barely old enough to fend for himself, let alone his much younger brother, leaves Ārama with their Aunty Kath. Wracked with guilt Taukiri drives off, Snoop Dog blaring from his car radio, to forge a new life for himself in Wellington.

Aunty Kath’s husband, Uncle Stu is abusive and the already deeply wounded Ārama is further traumatised by the violence he is forced to endure. It almost overwhelms him, would have— if it weren’t for his cousin Beth, Uncle Tom, and their cherished dog, Lupo.

I had question after question at the beginning. How did this happen? What’s going on here? But quickly I was immersed in the story, carried away on a tide of grief and survival by Becky Manawatu’s writing. And page by page, sentence by sentence, word by word, she told me the story of these people.

Her writing is evocative. Her characters, despite the terrible things that happen or that they do, are the sort of people we all know. They could be you. They could be me. Whether they’re adults or children, they’re people struggling to cope in an unpredictable world. And Becky Manawatu writes into the heart of them all.
This, from Ārama:

Taukiri was a real dick for leaving me. He should’ve known I wouldn’t be happy with Aunty Kath snd Uncle Stu. If it was a good place he would have stayed too, but he left with his guitar and somewhere in some stupid city he was playing songs I couldn’t hear.  No one played songs here. No one listened to music or told stories. They didn’t even realise not doing those things made them bad people. The worst thing was I didn’t think Aunty Kath was a bad person, she was just a ghost of a person, and I knew why. Uncle Stu made people doubt they existed, and when you doubted you existed long enough, you started to disappear.

Maybe the day my family stopped existing, I did too.

Was I just a ghost haunting the wrong house?

Crying in my old room felt different to crying at the farm. On the farm it scared me to cry, because no one might stop it. Even if they tried. That left it to me. I was left to me, and that’s what it meant to be an orphan. (p108-109)

Check out an interview by Lynn Freeman with Becky Manawatu on Radio New Zealand here.

Auē is a book that’s a cry into creation for all those children harmed by life. It’s a cry of protest. And, it’s a cry of redemption. Very highly recommended.