Why I am reading this year’s Man Booker winner

I picked the wrong winner. We Are All Completely Beside Ourselves didn’t win the Man Booker.

The good news is that for the second year in a row the  prize has come down here, to the bottom of the world. New Zealand’s very own Eleanor Catton won in 2013  with The Luminaries. (Proud though I am that she took out the prize I have to admit: I haven’t read it.)

This year Australian, Richard Flanagan won for his novel The Narrow Road To The Deep North. It’s about the Burma Railway.

When I realised the subject matter it went straight to the top of my reading list. There are two reasons for this. 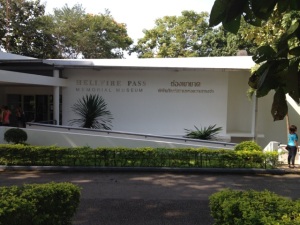 The first is that last year I visited Kanchanaburi, Thailand. I went to Hell Fire Pass, I rode on the Death Railway and I walked across The Bridge On The River Kwai at sunset.  It wasn’t an easy day. As we descended the hundred or more steps from the  Australian Memorial Museum down to Hellfire Pass, in sensible shoes, with sun hats and bottles of water and our stomachs full, we and our previously light-hearted companions grew quiet. When we spoke it was with sombre, hushed tones, the sort you might get in church – at a funeral. The ghosts of the prisoners were all about us.

The Burma railway alone was responsible for 20% of Australian casualties during W.W.II. Many thousands more Malays and Chinese, lured  into forced labour on the railway with promises of jobs and money, died as well. The deaths of these people weren’t even recorded. As the war effort became more desperate and success more elusive, the prisoners and the labourers were tortured, beaten, starved, and then required to work eighteen hours a day, hacking the railway through stone and jungle, their bodies ravaged by cholera, beri beri and other diseases. The photos  I saw in the Memorial Museum were as bad, if not worse, than any I’ve seen from Nazi concentration camps. 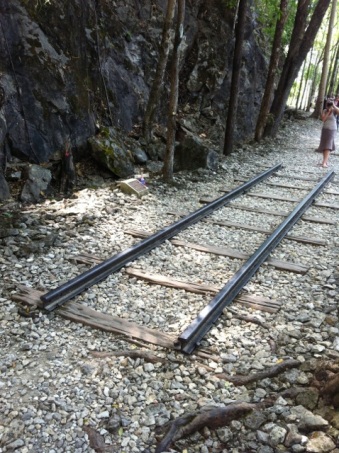 A death for every sleeper 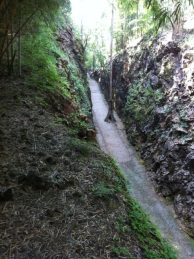 Looking towards the hills of Burma from The Death Railway

The view from the train over The River Kwai 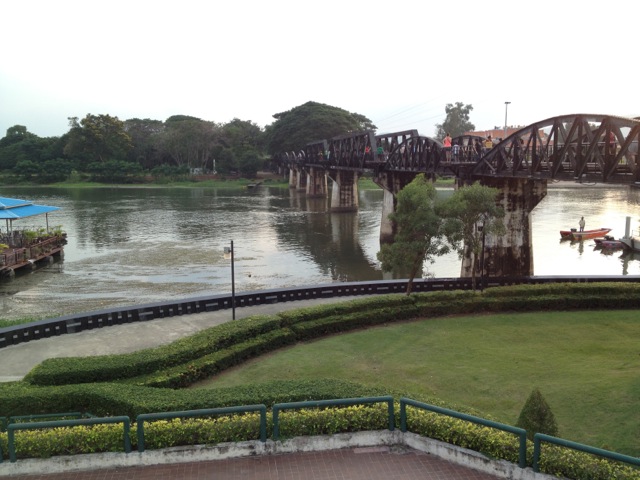 The Bridge Over The River Kwai

The second reason the book went to the top of my list is this: I’m a post war baby, a boomer. Growing up I heard terrifying stories of the  atrocities committed by Japanese soldiers, desperate not to lose face, in The Pacific Theatre. Moreover, the threat of attack and the fear of invasion in New Zealand was very real. There are stories of Japanese submarines surfacing in Auckland harbour, even of one being seen in the waters of Hawkes Bay. German raiders set mines and attacked allied ships in New Zealand waters. My Dad, as part of the Hawkes Bay regiment, spent a long, cold winter garrisoned at Woodville, sleeping in the stands at the Race Course, guarding The Manawatu Gorge, a key access point across the island. They were to stop The Japs if they tried to get through the gorge. And then later, he was required to guard a prisoner of war camp, after atrocities had been perpetrated against the prisoners – those prisoners were Japanese soldiers. I know from the little Dad said and from his memoirs he took his duties seriously.

WWII cast a long shadow over my childhood. And a deeper and darker shadow over the lives of my parents. One that they didn’t talk about much. It must have been like that for Richard Flanagan, even more so. The Narrow Road To The Deep North was inspired by his father’s experiences as a prisoner of war on the Burma Railroad.

Now, when I’m not reading The Narrow Road To The Deep North, I’m wishing I could be, or I’m thinking about the phrases, the descriptions, those aha moments that are my greatest reading pleasures. Flanagan’s simple description of the jungle during the dry season is an example: “the trees were leafless, the jungle open, the earth dusty.”

I’ve only been in to the jungle in the dry season and that’s exactly what it’s like. It might be humid, but it’s not steamy. It is dusty. Last year, I’d wondered where all the vegetation was. Now I know – if I want a verdant and dense and steamy jungle, I need to visit during the rainy season.

The Burma Railway was meant to secure victory for the Japanese. They expected to force it through the jungle from Thailand, across Burma to India and they expected to do the job in a  a year. As they became more desperate, the pressure on their soldiers to get every ounce out of the labourers and prisoners became immense. The brutality delivered to those men was inhuman or, you could say, dreadfully human.

Last November, in the van on the way back to town there was little conversation. We were all deep in thought. I wondered  about the Japanese guards. It’s all too easy to pillory them, to place the blame on them. I don’t think it’s that simple. As Richard Holloway, the former Bishop of Edinburgh, says we all have the capacity to be saints and we all have the capacity to be monstrous. What happened there, it’s in all of us.

The next day, before heading back to Bangkok, John and I visited Kanchanaburi war cemetery. Over 5000 men from the Commonwealth are buried here. In the stinking heat and humidity, so hot I felt ill, l searched for and found the graves of the three New Zealanders who lost their lives so far from home, in a country so different from anything their families were likely to have been able to imagine, in a war that at the time looked unwinnable. It was the least I could do.

Of all the sights at Hell Fire Pass, this is the one that stays with me, the one I reflect on the most often. The Peace Vessel. It’s on display in the museum, directly above Hell Fire Pass. Those hills: that’s Burma. In between there’s only jungle. Peter Rushforth  survived The Burma Railway. On his return to Australia he studied pottery in Melbourne. His pieces are exhibited all over the world.

I’ll let you know what I think about The Narrow Road To The Deep North when I’ve finished. I have a hunch it’ll show me humanity – how great we can be and how monstrous.

Richard Flanagan said in his acceptance speech when he was commenting on the future of the novel as a form: Novels are life. That’s a statement which encourages me to read this book with hope.

Have you been to Kanchanaburi? To Hell Fire Pass?

And, what are your thoughts about this year’s Man Booker winner?

Leave a Reply to prior Cancel reply