In which a yellow pant suit symbolises irrevocable change

On Thursday I flew to Wellington (NZ) for work, as I sometimes do. The airport is notorious; the runway is short and the wind can be treacherous. Thursday was typical … okay, I’ll be honest …  the weather was rough. A gale nor’wester was blowing. We circled over Cook Strait, banking, correcting, banking, again and then again, and again before the pilot began the final descent.

There were several stomach churning lurches and bumps, and a collective holding of breath among the passengers while the pilot eased the plane to touch down.

My very first arrival at Wellington airport back in 1976 was similar – only worse. I’d spent the year as an exchange student in the States. Two things stand out about that day. The first was the goose bump, heart skipping, stomach clenching moment when I saw the green hills and blue seas of Aotearoa from the air. Good grief – when I left twelve months earlier I’d never been to the South Island or flown anywhere, let alone across the Pacific.  I was terribly homesick while I was away especially in those early months.

I don’t remember anything about the turbulence or the aborted landing attempts other than the relief of arriving home. My parents and my sisters were waiting at the airport. They’d travelled to Wellington to meet me – a big deal for our family in those days. They’d had nearly an hour of boredom, frustration and worry while we circled above them. They’d been told, prior to our last approach, that if we didn’t land the  flight would  be diverted to Auckland – an eight-hour drive back then.

During that year away I lived in the Red River Valley, in a small town on the border of Minnesota and North Dakota, with a warm, generous and kind family who opened their home to me. I visited the Twin Cities, Minneapolis/St Paul, several times. I’ve since travelled to some of the world’s super cities. But when it came to this week’s travel theme, Cities, I  knew, despite some close contenders (Bangkok, Bangkok, and Bangkok again – as those who have visited my blog before would expect) the Twin Cities have to take the top spot for my favourite concrete jungle. On the world stage they may not rate, some will be scratching their heads, wondering – Concrete Jungle? The Twin Cities? They are, after all, blessed with large skies and wide open spaces.  For me there was only one criterion: the city in the world which has changed me the most.

I was a girl, remember. Seventeen, actually. I’d lived a sheltered life in NZ and I was living in rural Minnesota. It’s a land of  snow, the occasional blizzard, isolation, few people, fields of beets and sunflowers, and roads that run straight ahead until they merge with the horizon. There are no hills, not even a bump. The howl of  the prairie wind is as noisy as the Pacific in a southerly. The wail of the night train to Seattle is the loneliest sound in the world.  I was used to falling  asleep to the sound of the Pacific, and waking to views of hills, burnt white-brown in summer, and white with frost in the winter. I was used to a valley looking like a valley! Living in that part of Minnesota  was a geographical as well as a cultural challenge.

Visits to the Twin Cities were bound to have an impact. And they did.

It was there, very soon after I arrived that I saw my very first all-American baseball game complete with popcorn and hot dogs. Wow. It was just like the movies. There were cheerleaders and marching bands. As for the game I didn’t really know what was going on but I knew it mattered to everyone who was there. I understood the atmosphere all right! The stadium has long gone. It’s been replaced by The Mall of America.

During one visit I went out on the town with the daughter of family friends. She was a city girl, at college, maybe in her junior year – older and much more worldly-wise than me. She took me to my first ever art house movie. I don’t think such theatres existed at home back then. Certainly not in my town. We have one or two now – in fact I’m just home from a screening. They haven’t changed much – small, dark, often with few patrons.  I’ve forgotten nearly everything about that movie – title, plot, characters. But I did find certain scenes – ah – revealing. No more needs to be said on that score!

Afterwards there was plenty of energy to burn off. (You can guess why.) It was midnight. There was a moon, snow and, as I have mentioned, an abundance of energy. My father’s friends had a spare set of cross-country skis. So what else was there to do? Not being very sporty at all its remarkable that this I could manage. It took little instruction. The park – it may have been a golf course during the summer months – had enough slopes to make it exciting. It probably helped that in the gloom of the night I couldn’t see much. I’ve never quite gotten over the thrill of going down hill over snow with two long sticks strapped to my feet. Even now, at the first decent dump of snow on Ruapehu I get a taste of ski fever.

Minneapolis/St Paul is where I attended my first professional theatre production – Midsummer Night’s Dream. Leonard Nimoy, yes him!, had star billing. I think he was Oberon. Shakespeare was a mystery to me at the time and I knew nothing about the play. Plus I was star struck. To think that Spock was actually breathing the same air as me, more or less, was too much of a distraction. I’ve seen Midsummer Night’s Dream several times since and come to love it. (The best was an outdoor production in which Puck created mayhem on a ride-on mower.)

The realisation that Leonard Nimoy, Picasso, as well as cheerleaders and marching bands, who I’d only seen on TV or read about in books, actually existed changed my life.

I’ve been back to Minneapolis/St Paul once, on my way to my special small town in the Red River Valley. I don’t know where the park was. My father’s friends have passed away. I did buy shoes at the Mall of America, pay homage to Mary Tyler Moore and the Loon sculpture on Nicollet Avenue, wander through the Weisman Gallery, visit the sculpture garden and spend hours exploring the exhibitions at the Walker Centre. 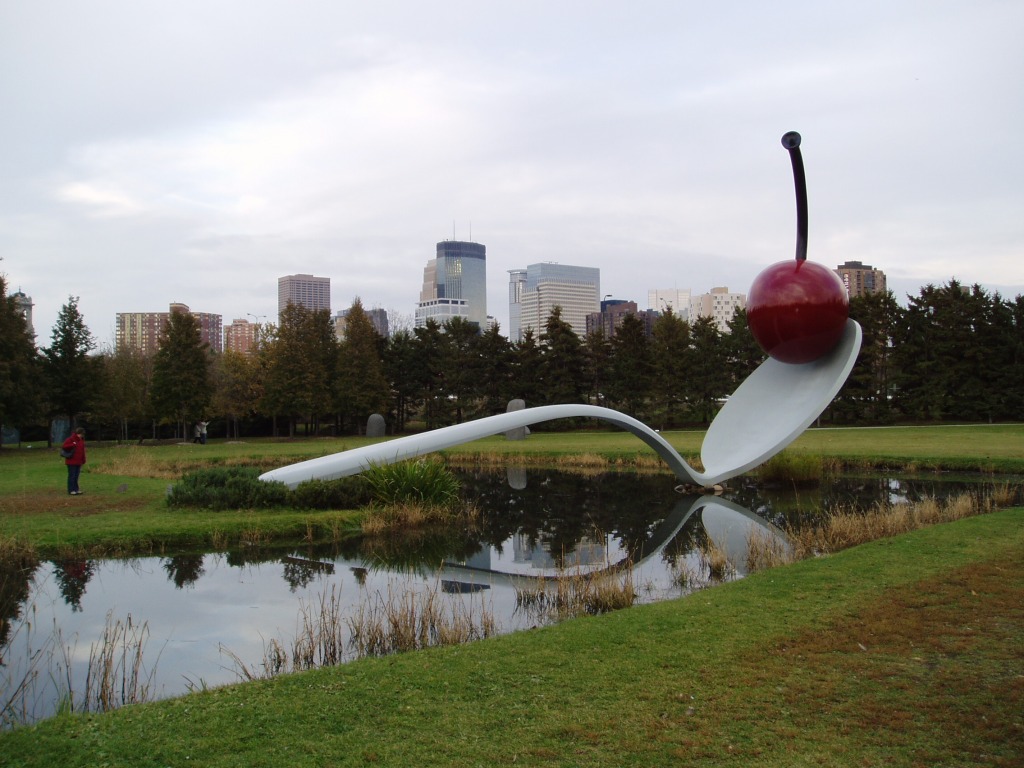 Minneapolis Skyline from the sculpture garden. 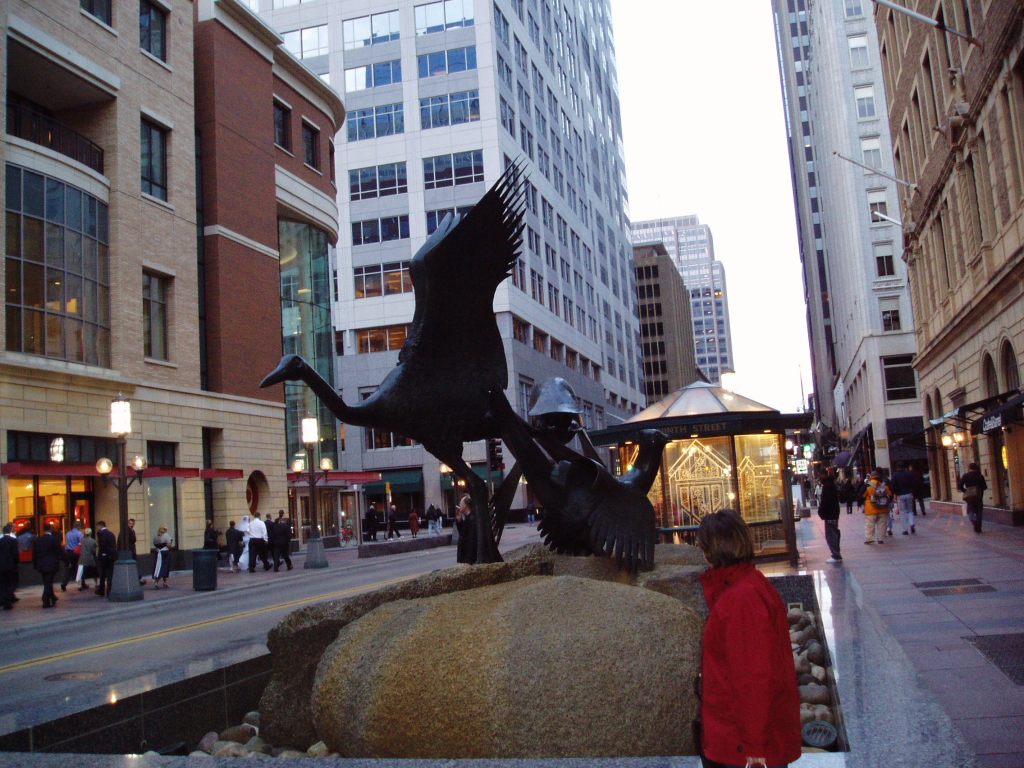 Loons on Nicollet Ave, Minneapolis – and a bit of a concrete jungle! 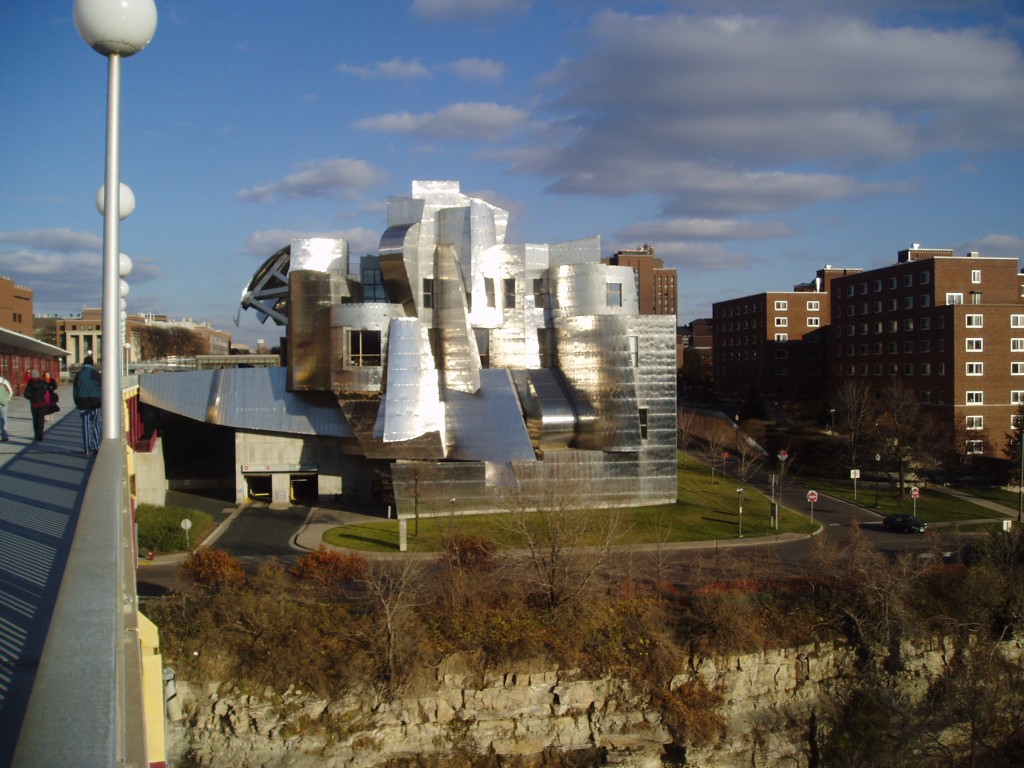 And there was this – a palm tree in a giant glass house. The trees are common at home, they line one of our main streets. They grow so fast and so large they can be a problem in residential gardens

That’s travel – you get to see the ordinary, the every day through different eyes.

The opportunity to live with another family, to experience a different culture up close, well, it changes everything.  And so,  the second thing that stood out about my arrival at Wellington airport  back in ’76 had nothing to do with the turbulence and the ensuing rough landing. It was the culture shock that went with readjusting to the New Zealand way of life. My sister still talks about watching me disembark from the DC9. No air bridges in those days. The effects of the dietary change over the previous twelve months were all too apparent in the bright yellow pant suit I’d chosen for my arrival. Any shade of yellow isn’t really my colour. And pant suits weren’t exactly de rigueur in NZ at the time. She wasn’t too impressed with my new accent either. But that disappeared within a few weeks – although some of the idioms lurked about for years. “You’re welcome,” was considered an Americanism back then. As for “oofdah”  – that was just plain weird. For a while I think she and the rest of my family thought a fat, yellow pant suit wearing, American imposter had landed in the family.

The  girl who fell back in love with her country on the basis of a glimpse from an aeroplane was not the same girl who left a year earlier. Although the accent faded, the pant suit was retired early, and those extra pounds eventually dropped away, there was no way back to how things once were.  Picasso, Leonard Nimoy, skiing at midnight and so many other things had changed the lens through which I view the world.