Social psychologists say that first impressions matter. That formulating those snap decisions, usually about people, has a survival function. It helps us assess safety, and trustworthiness, attractiveness and intelligence, amongst other things.

Those impressions can be correct and they can be wrong.

I’m like everybody else. I was formulating impressions from the moment I stepped off the plane at Yangon.

Near the terminal exit English speaking staff procure a taxi for arriving passengers.

We showed the the woman on duty the address for our hotel—at that stage we didn’t have a clue how to pronounce the street name.

No problem, she said. I will arrange for you.

John looked at me. I looked at him. Do we trust her? With a shrug from him, a raised eyebrow from me, we were escorted to the taxi stand. There we stood by, our bags already in the car, wondering what was happening while three or four drivers discussed the matter. I thought they might have been arguing over who had the job, or debating the price. I was wrong. They were working together, pooling their knowledge: confirming the exact location of the hotel and the best way to get there.

Our driver, a small man, with thick rimmed bi-focal glasses and a gentle manner, drove carefully through, what seemed to us, a most circuitous route. We went down back alleys and along side streets. Sometimes I was sure we doubled back. It turns out he wasn’t taking the most direct route and neither was he on a mission to rip us off. He was avoiding the delays of rush hour and road works.

The next morning we went exploring. I came face to face with a powerful stereotype. One I held. See the straw hat in the photo below? 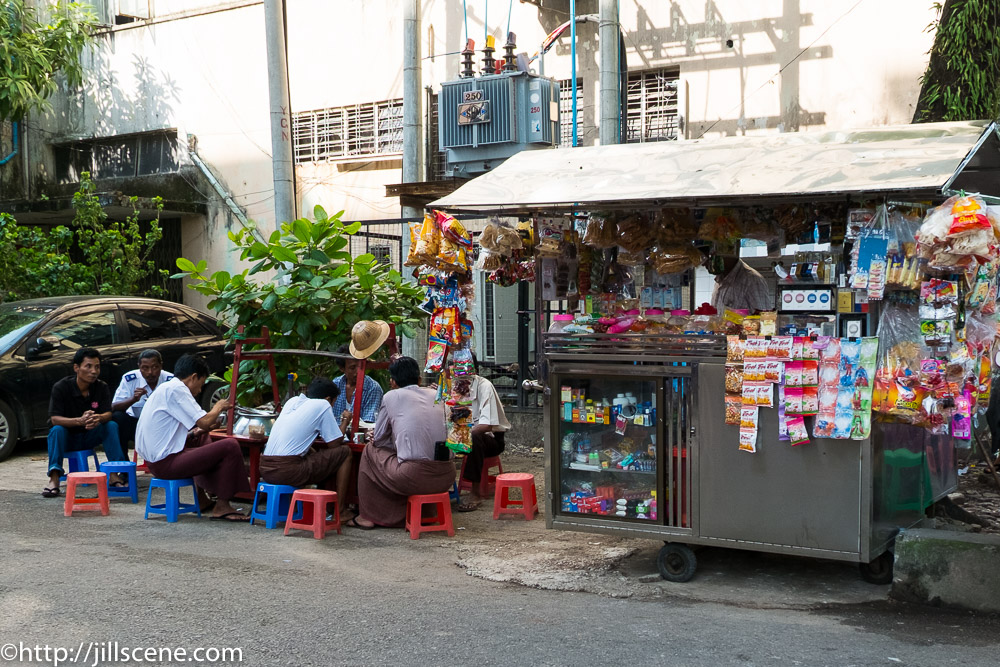 I saw that hat and was immediately fearful. Why? You can see that these gentlemen were engrossed in their breakfast. (It was Mohinga, a rice noodle and fish soup which is delicious, especially with a sprinkle of chillie and a squeeze of lime.) Baddies wear these hats. As in the Viet Cong. Remember them?

I know, I know! Wrong country, wrong epoch, wrong in so many ways. But nevertheless the association of those hats with enemies was ingrained in my psyche.

It turns out those hats provide much needed and relatively cool shade from the scorching midday sun. Essential items for trishaw operators working the streets of Yangon, and nothing at all to do with the predispositions of the wearer.

Yep, those first couple of days in Yangon, while we got oriented were challenging. Sometimes overwhelming. No more so, than on those first walks around the city.

How the traffic worked was a mystery. 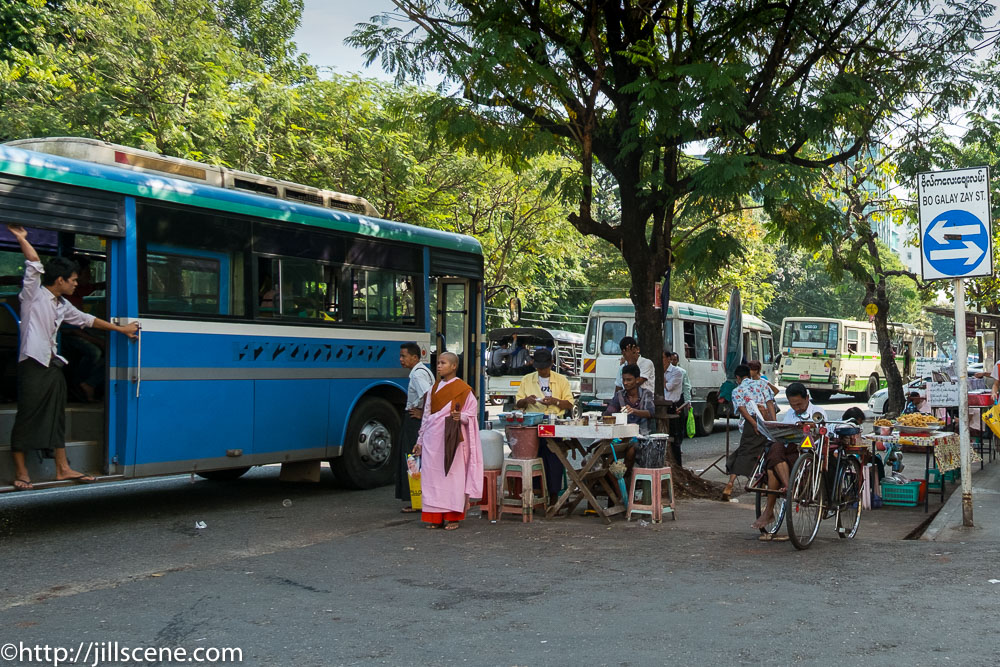 This, my friends, is actually bus stop. But the buses operate differently. They’re privately owned and at each stop, the conductor, who you can see in the door way, yells, in the loudest voice you’ll ever hear, the route and the destination. Those waiting ignore every bus except the one they want.

I didn’t try to catch one.

And although early in the morning the roads aren’t busy, by the time we had wandered down to The Strand, near the docks, the traffic was crazy. 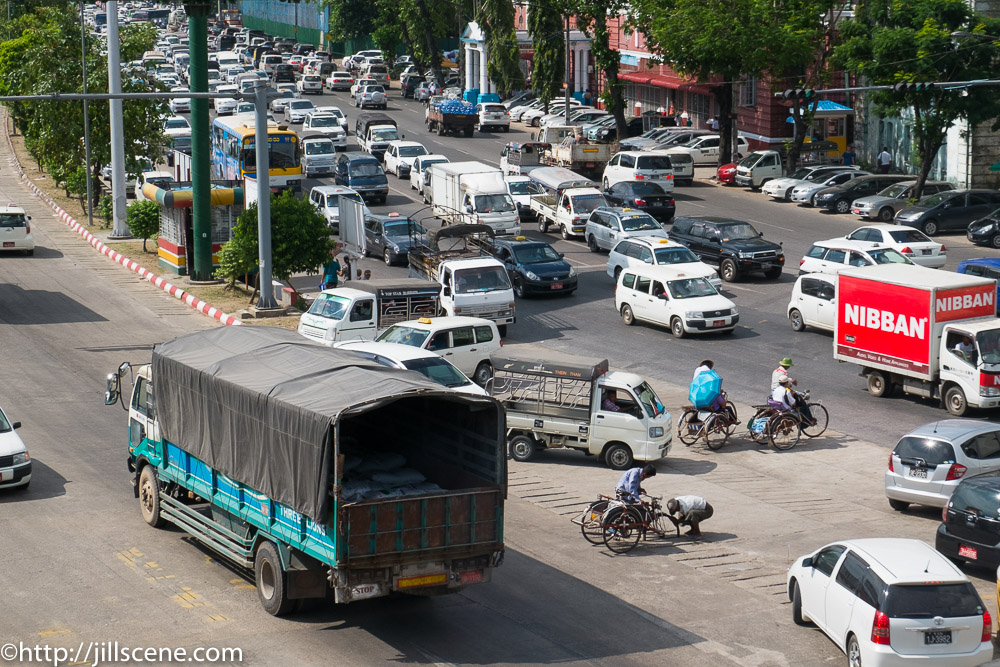 Our solution for getting across? Clutch each other and step out into the traffic when the locals did. This worked, in that I’ve lived to tell the tale. But there were moments, standing on the centre line with traffic streaming past on either side, when I wondered whether I would get to tell you all about it.

Wandering back to the hotel through the markets was, as always, fascinating. There too, the key is to move slowly and watch where you put your feet. This is more tricky for those whose feet are significantly larger than the average Yangon resident. Yup,  tripping was an ongoing risk for John.

Those feet of his were also the source of my worst moment on that first day; perhaps the worst moment of our entire four weeks in Myanmar. To be honest I was already a bit worried about the practice of selling food sitting on the ground, no ice for the fish, and plenty of flies. 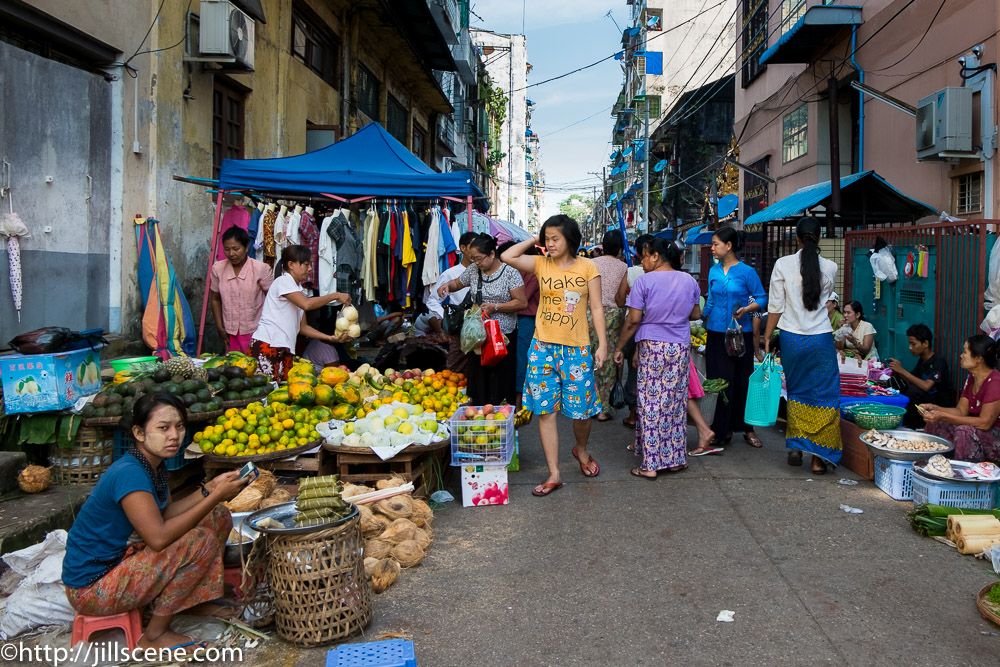 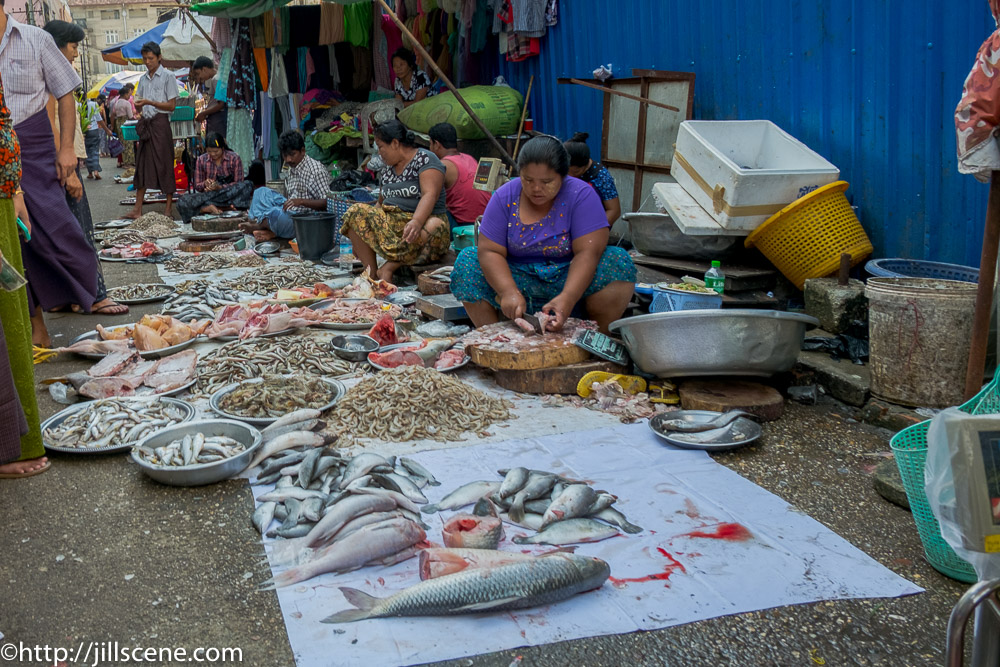 So imagine my horror,when I heard John’s shoe squelch into something.

It was a moment where just for once, I wish I wasn’t quite so curious about things, where I wish I had resisted the urge to look down.

Be warned: click away now, if you have a squeamish stomach.

My friends, that squelch was the sound of shoe meeting rotten, dead rat.

That day I didn’t buy anything from the market. Not a banana, not an orange. Not a bottle of water. Nothing.

It took all my self-control not to rush back to our hotel and make John scrub those shoes with every last drop of our hand sanitiser. I wasn’t going to be touching the things. No way!

It took me a long, long time to recognise it was a good thing the rat was dead.

After that I was a little challenged by where and what we ate. Thankfully, hunger won out against that preoccupation. The food in Myanmar is delicious.

It was our first full day. I didn’t know what was ahead. But I can tell you, now, that in four full weeks, I saw plenty of mosquitos, plenty of fresh markets, and plenty of rubbish, as well as challenging living environments. But I didn’t see one more rat, dead or otherwise. I have seen the most wonderful of sights, I have met the kindest and most helpful of people anywhere. And I was there at a momentous time in history. I’ll tell you more about that later.