Slow boat down the Mekong – from Pak Beng to Luang Prabang

The Mekong is the 12th largest river in the world. It rises on the Tibetan Plateau, flows through Yunnan province in China, into Burma, then Laos, where in places it marks the border between Laos and Thailand, on into Thailand and then Cambodia before forming a large delta in Vietnam and flowing into the China Sea.

For me it’s one of those rivers, like the Yangtse, or the Yellow River, the Seine or the Mississippi, a river you hear so much about in the course of your life and, if you’re very lucky, you might get to see it for yourself. Even catch a boat on it.

In fact, taking a slow boat down the Mekong sounds romantic, in a sedately adventurous kind of way. It’s a popular way to travel between Huay Xai, on the Laos-Thailand border, and Luang Prabang. For most it’s a two day trip. We joined in at the half way point at Pak Beng. 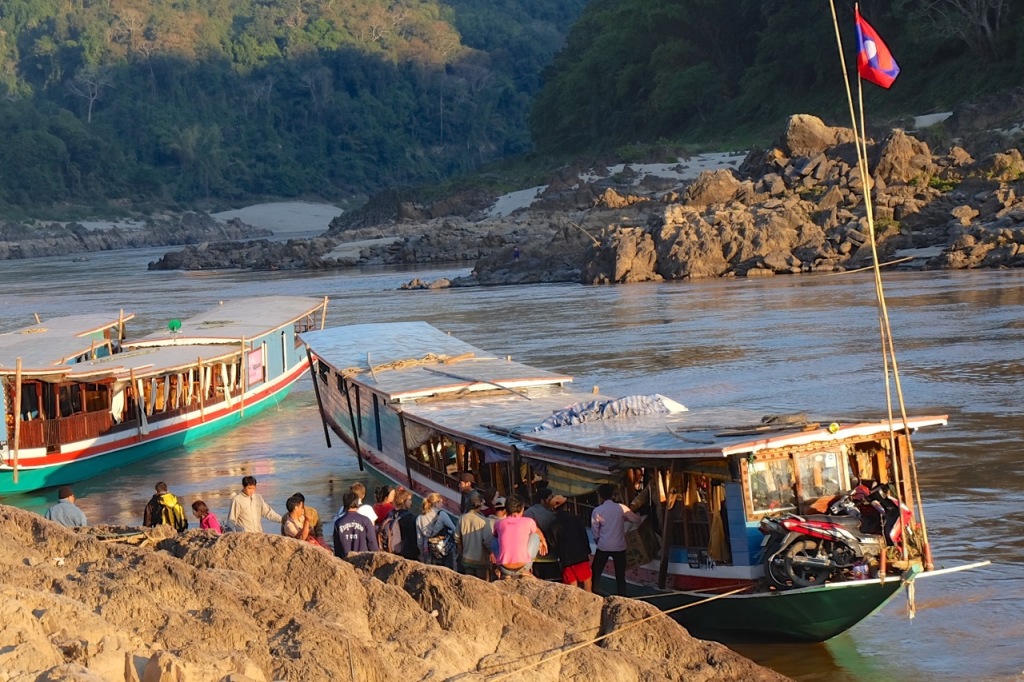 There are horror stories on the web about this river trip. Travellers complain of overcrowding, boredom, the cold, the slow nature of the journey, the hard seats. Some even tell stories of having gone aground.

We watched people come and go at the wharf in Pak Beng for two days. Yes, some people had difficulty getting up the river bank after sitting on a boat for seven or eight hours, and, yes, there was a gangplank to cross, but I’d gotten used these things on The Nam Ou.

Our only concern was securing a ticket. The locals we spoke to said: no problem, you get on boat, it okay. We reminded each other that the locals know more about how the system works than we do, that whenever we’ve been told it’ll be okay, it has been okay.

However our online research told us that things can get a bit cramped on the boat. Romantically adventurous or not, sitting in the aisle of a boat for seven or eight hours didn’t appeal. Never mind coping with the worry of being stuck on an overladen boat for a full day. On this one matter, the local definition of okay and mine do differ. I kept that worry pretty much to myself. There wasn’t much I could do about it other than get on, claim a seat and then get off if the number of passengers was outside my comfort zone. Well, Good Luck with that, my sensible self told my worried self. It would be one thing to get off, and then an entirely different matter to get my bag which was, as it turned out, one of the first to be stowed in the hold. And getting off the boat would have meant facing my my nemesis – that bus trip back to Oudamxay, a particularly unappealing alternative. Or the one thing that seems to be universally acknowledged as THE dangerous way to travel the Mekong – catching the fast boat.  The risks range from hearing loss ( several passed us – they are noisy!) to head injuries and some people have died. But I have to say it looked thrilling. Those fast boats take only three hours compared to the seven or eight hours we signed up for.

I was determined that if I was going to be on an overcrowded boat I’d at least have a seat. We were at the wharf by seven-thirty in the morning. I’m grateful to a young couple we met. They were catching the boat to Huay Xai, and then going on to Thailand. They suggested we get a seat near the front and to avoid the seats at the back – those unlucky passengers got all the engine noise. There’s nothing like the racket of a diesel engine laced with the accompanying fumes to set off a headache and spoil the trip. We were there early enough to have the pick of the seats.

And I’m pleased to report our seats weren’t wooden. They were the usual upholstered car seats we’ve encountered on our other river trips.

Our fellow passengers arrived over the next hour or so. 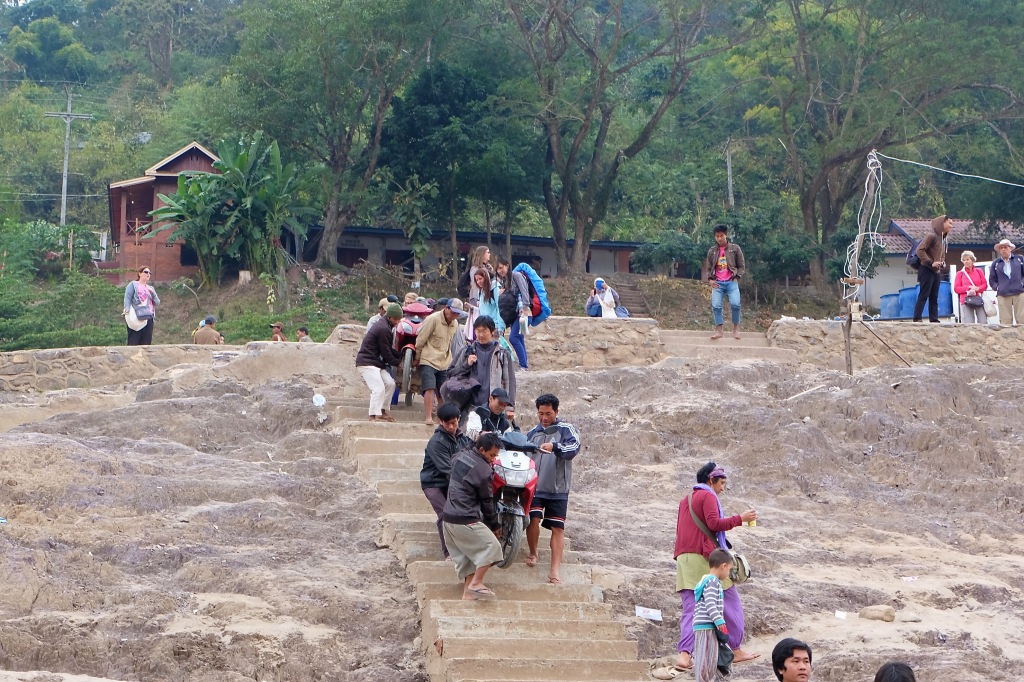 While the boat filled, I was preoccupied with identifying our driver. When I saw one official looking Lao man glugging from a small dark bottle my blood pressure went up. John glanced over at me. That’s not our driver, he said. I don’t believe you, I said, and readied myself for a watery repeat of our bus journey

When a young, strong, serious young man sat behind the wheel I was relieved and pleased I hadn’t placed a bet with my husband. The bottle-glugger did get on board but I didn’t see him again. 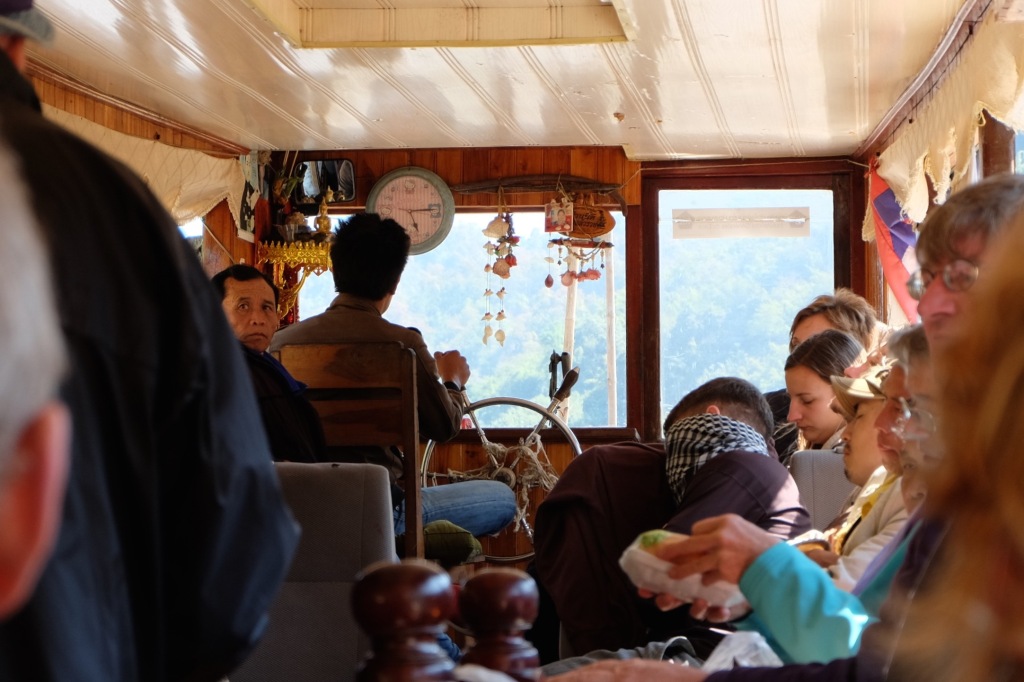 I’ve been told it takes over a year to learn how to read the river and I believe it. Our driver chose his course carefully. Some passengers stood out on the front deck but whenever we approached any significant rapids he instructed them to come inside. The boats are family owned which means there are a lot of people depending on the boatman’s good judgements.

Yes, our boat was full but I didn’t find it too crowded. Yes, the morning air was chilly but not so cold as to spoil it. And yes, if we’d been sitting at the back it would have been noisy and smelly. Instead, the thrum of the engines, the green of the jungle, the thinning mists, and then the blue sky, put me into a kind of trance. I couldn’t bear to take my eyes off the view.

I had my kindle with me and an audiobook loaded on my phone. But I used neither. The hours passed and it seemed as if there was alway something new to look at.

Laos was once known as the land of a million elephants. We haven’t visited any of the elephant parks or taken any elephant rides. (I still haven’t worked out what I think of all that since our experience at Ayutthaya in 2012.) Nevertheless, I was envious of John’s encounter the day before with some working elephants. Spotting these two made up for that – a bit. 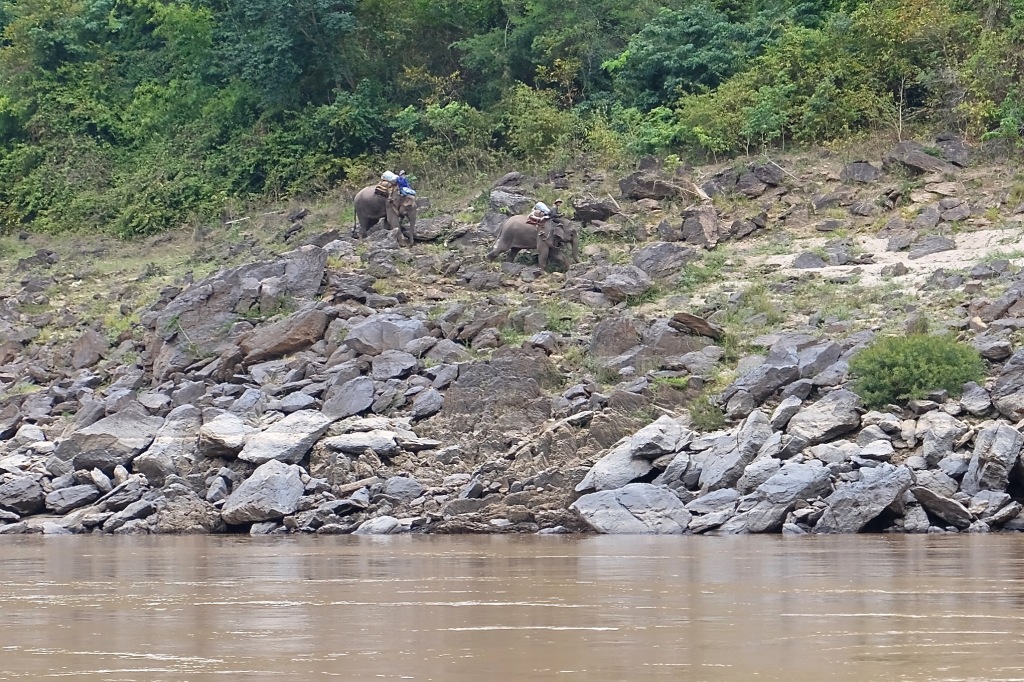 From time to time we pulled into shore to drop off or collect passengers. On one occasion I looked up and was surprised to see a young man apparently standing on the water. We barely slowed down for him. I remembered my day trip to the Pak-Ou caves and how shocked I was when we had to change boats midstream. Now, I realise how routine that is for people living on the river. 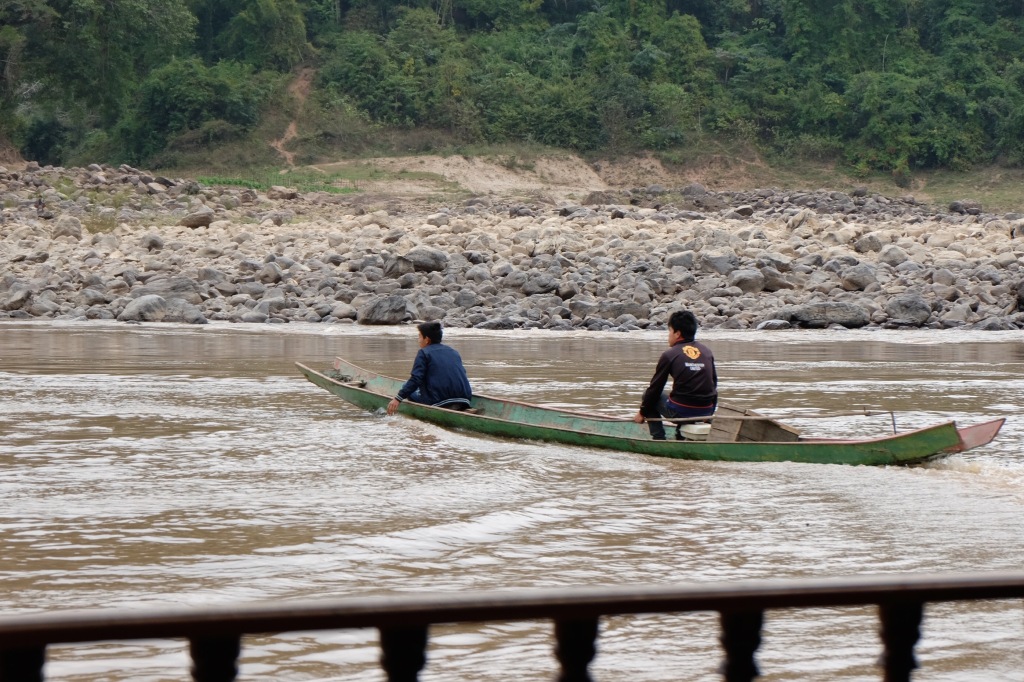 His mates head back to shore

We passed village after village occasionally glimpsing a few homes.

A village on the Mekong

Sometimes, gardens and boats were the only clue a village was nearby.

Somewhere nearby is a village

Sometimes village children ran down the bank to meet a returning passenger. 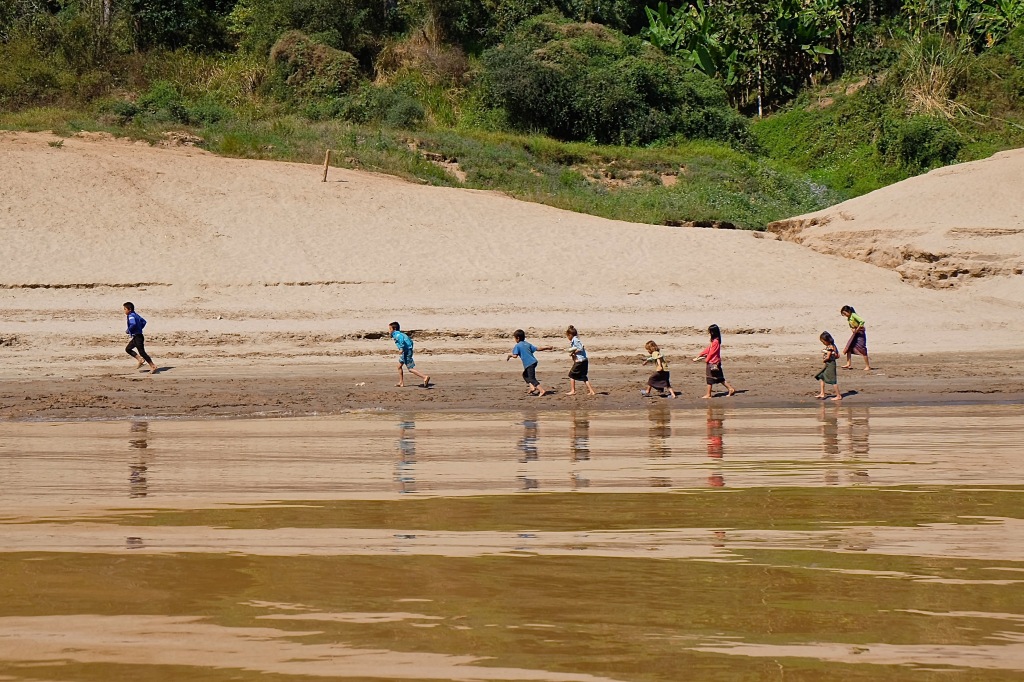 Villagers never returned home empty-handed. There were always bags of vegetables and other essentials to be lugged up the bank. 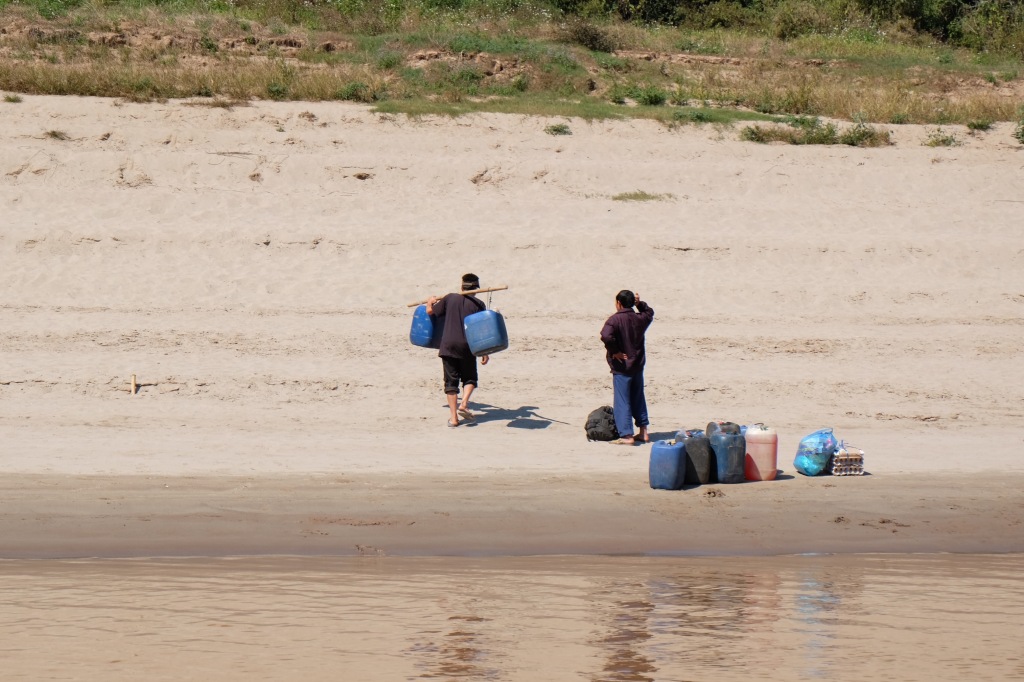 For lunch we took a baguette and some fruit and snacks with us. Around lunch time I was driven mad by the delicious smelling chilli salad, it was probably larp and sticky rice, that some of our fellow traveller’s had brought with them. And I wished we’d been a little more creative in our shopping. Beer Laos and snacks were sold on board.

Eventually the sun lowered in the sky. We were getting close to Luang Prabang. We passed the Pak Ou Caves. 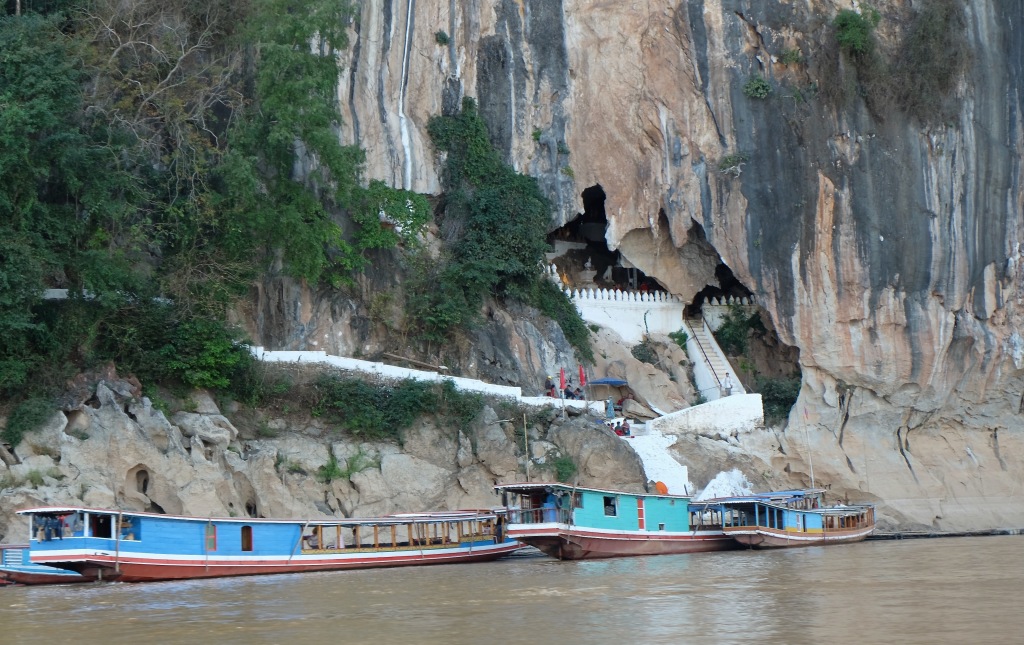 And opposite I saw once again the confluence of the Mekong and the Nam Ou. It was like the closing of a circle for us. I’d seen so much, done so much, and learned so much, since leaving Luang Prabang more than three weeks earlier.

Confluence of the Nam Ou with the Mekong. Up the Nam Ou, that’s where you can find the boat lover’s dream ride – for now. 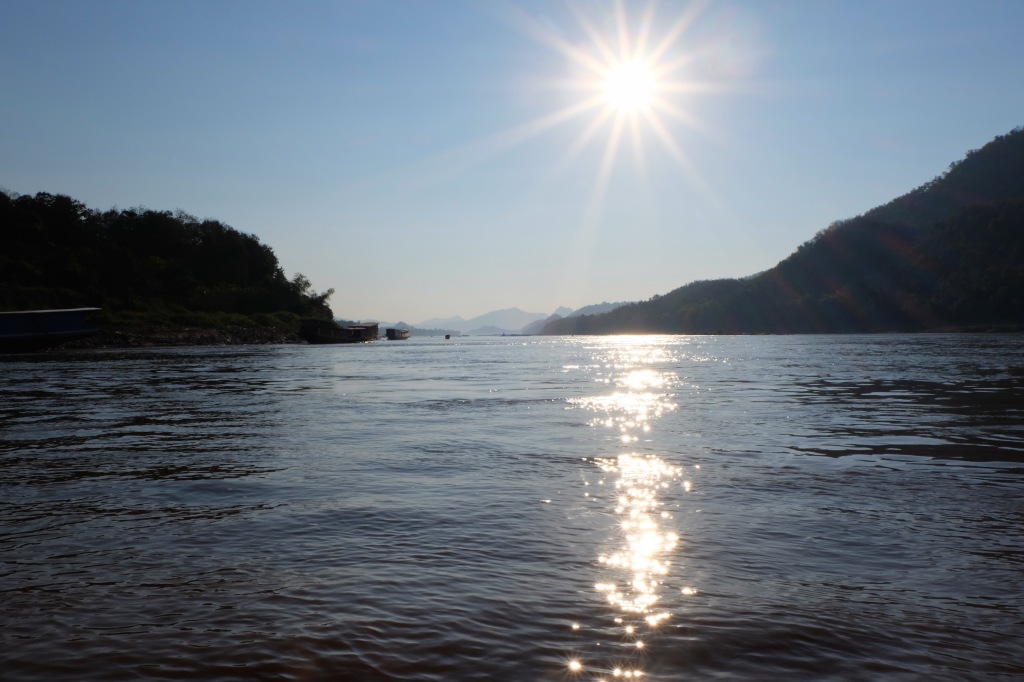 The river port, near Luang Prabang

Just around the corner we docked at the port of Ban danmai. Once we’d lugged our bags up those steps ( I’ll be honest, John carried the big ones and I carried the little ones, I’m still not earning brownie with points with Laos women) tuk tuk drivers were waiting to take us into town.

The boat trip itself cost us110,000 kip each. That’s about $NZ17.00 – fantastic value for money. The trip was comfortable, gosh there was even a European style toilet on board, the fresh air invigorating, the views memorable. It was a leisurely way to make the return journey  to Luang Prabang, a sedate adventure.