Psychologists have a therapy for worries – especially those attached to a particular thing – like riding on boats in Asian countries- no, make that riding on boats anywhere. It’s called Exposure Therapy. Heard of it? Basically, the idea is that graduated exposure to the object of fear leads to the individual (okay, we know this is all about me) discovering that the thing they are afraid of is actually not worth the worry.

So, after a successful day on the water on our private trip up the Nam Ou, the logical next step was to catch the public boat from Nong Khiaw to Muang Khua.

Whatever psychologists might have to say, the truth is, I was too weakened from three days without food and too eager to move on to put any energy into worry about boats.

So, when John came back with the news he’d booked our ticket I packed my bag and followed him across the bridge and down to the boat landing. Too weak to manage my own bags on the steps John carried them all and I endured the disdainful looks from the local women. They are strong these women. Very strong.

The landing was an unsteady affair and it was overburdened with nervous tourists. (It turns out I’m not the only one.) They were all headed to Muang Ngoi, an hour up the river – although some of them were confused about that.

Our destination was Muang Khua – another six hours further on. The boat man called to John and me, telling us  to come forward. Others complained about our preferential treatment and were slow to make way for us. They clutched their bags anxiously as if at any moment the bags might topple into the river, or be snatched from them by a thief.

What’s your rush, asked one, resentfully, as we tried to follow the boatman.

We explained where we were going and each traveller said, So are we.

That’s strange, said John. I was told we are the only ones going that far.

The boat man kept pointing to us and waving us forward and eventually our fellow travellers realised that blocking the way was delaying their own departure.

The crowd parted and our boat was revealed. The boatman proudly indicated the special seats reserved for us. Two padded car seats fixed to the roof of his boat, in splendid, elevated, isolation from the rest of the passengers.

And that folks was one step too far in the exposure therapy for me. You’ve got to be joking, I said.

It was no joke.

Forget worries about gangplanks – there was no ladder, nothing. Getting to those seats would require the agility of a monkey and the upper body strength of a body builder. None of which I have on a good day – and physically this was not one of my best.

I wondered how much fuss might be reasonable in front of such a large audience.

But (as far as I am concerned anyway) sometimes the hesitation that comes with blind panic works in your favour.  The boatman called out, “You no like? No problem. Today we have two boats.” Another larger boat appeared. John and I were again waved through the crowd and onto the boat. By now I didn’t care what the others thought. It was every traveller for themselves. We took our seats, the very front ones, and smiled politely as everyone else pushed past us to find whatever spot they could.

I was feeling quite calm, again. This is good, I thought. Front row seats with the best views in the house. And they’re not on the roof. The boat was quickly filled, all the remaining seats were taken. We’ll leave now I thought.

Still they packed in the passengers. Every available space was taken. As the boat filled we all grew quieter. I practiced my breathing and tried not to think about my flip flopping stomach.

And then the first boat of the day from Muang Ngoi arrived.

John’s a garrulous traveller. He’ll make conversation with anyone who will talk to him. He called out to someone, Did you enjoy the trip?

You’re not sure? asked John.

In life, sometimes, just sometimes, there are things I wish I didn’t have to know.

And this was one of those moments! The traveller replied, It was okay until we ran out of fuel.

Don’t tell me that, now, I said, wondering whether it was too late to disembark. What happened?

Another boat came along after a while and we refuelled midstream.

A murmur of discontent ran through the cramped passengers and the boatman, perhaps sensing a potential mutiny, pushed off from the jetty.

Although the boat had a powerful engine it was heavily laden and it laboured through some of the rapids. No one talked, everyone was watchful. And, an hour later when we reached Muang Ngoi our fellow travellers all disembarked. Their attitude had changed from resentful to compassionate. “You have another six hours of this! Good luck to you, was the comment from many.

At least we didn’t have to refuel mid-stream, I thought.

Ten minutes later, after a rushed trip to the loo that had me wishing, not for the first time and probably not for the last, for stronger thighs, it was John and me and some schoolchildren. They had finished school early.

And then it was the school kids and us

They laughed and joked their way up the river. No such thing as the luxury of a gangplank for them. At their village they were expected to jump. And they only complained when the gap was too wide and they got their feet wet.

And then, it was just John and me and the boat driver.

And then there were two

Sometimes the boat was waved down by villagers from the riverside. A few kip (Laos currency) bought a fare to another village further upstream.

Along the way we passed this dam – in only few months it will close off the river. It will mean a big change for our boat driver. At the moment he makes his living running his boat between Nong Khiaw and Muang Khua. 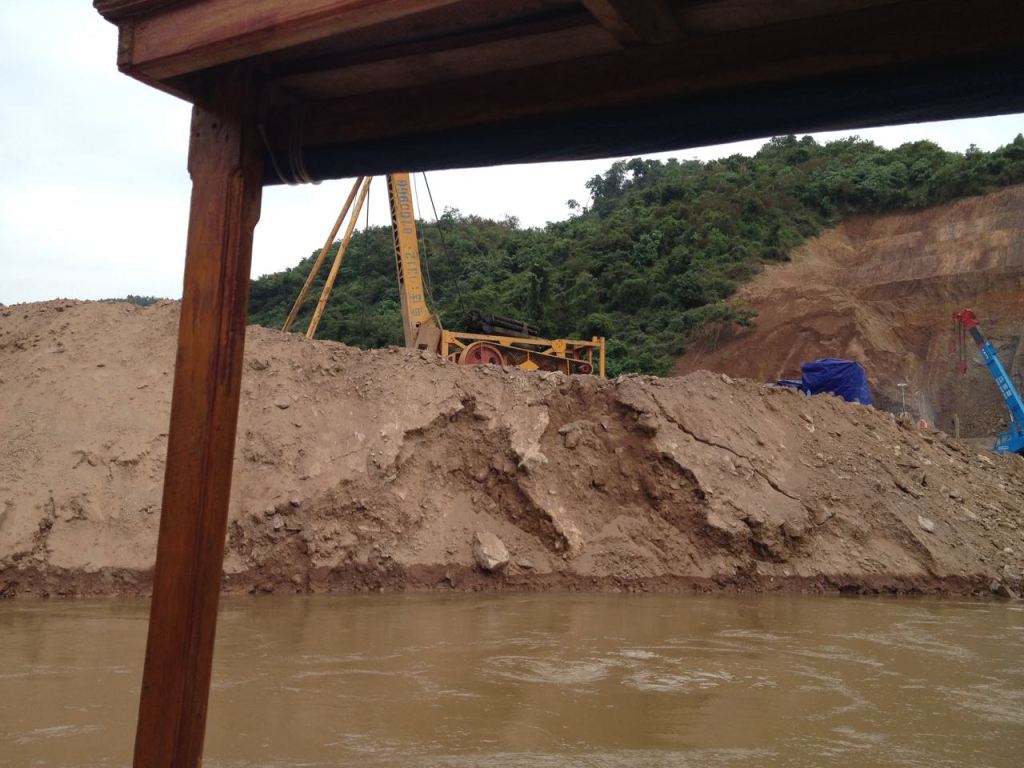 One of the eight dams planned for the Nam Ou

And I wondered what it will mean for the villagers all along this part of this river. We were told that many don’t know, or understand, the likely consequences. But we’ve seen reports in western papers that 89 villages will be displaced.

There was activity all along the river. People fishing, repairing boats, gathering river weed, growing vegetables on the banks, mining – all in addition to the transportation between villages. It will all change.

All too soon the journey, along with the way of life of the local people will be a thing of the past. We arrived in Muang Khua in the early evening, knowing we were privileged to have made the trip.

As for me and my tummy, there were a few moments when I thought maybe it was going to betray me and require a sudden stop on the riverbank. But it never came to anything, not that day, thankfully! And I made it up the hill into Muang Khua under my own steam, pulling my bag behind me. As for Exposure Therapy, perhaps there’s something to it.

Note for the anxious river traveller: The only life-jackets I’ve seen so far were worn by two travellers on a boat headed in the opposite direction from us. The wearers looked decidedly uncomfortable, even a little bit nervous – too nervous to return our wave. I doubt that the jackets were supplied. I wondered if they brought them to Laos.