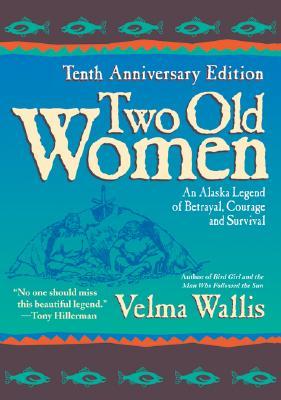 Two Old Women, an Alaskan Legend of betrayal, courage and survival  is an Athabaskan, legend, handed down from generation to generation, and brought to the page by Velma Wallis, an Athabaskan woman, who learned the story from her mother.

The Athabaskan people  live in the Yukon territory of Alaska, it’s a subarctic region. The weather is extreme. The temperature range is -71F to 97F, vast amounts of snow and hordes of mosquitoes are amongst the challenges life in that environment brings.  Prior to the impact of Europeans the Athabaskan people lived a nomadic life. Survival was directly connected to the bounty of the land and the ability to utilise it. Life was challenging, starvation a real threat. Now, in the twenty-first century most of the Athabaskan people live in remote villages. According to Encyclopedia.com  most villages are remote and there are few roads. Access is usually by boat or snow mobile or plane. Valma Wallis explains that living off the land “continues to be a vital component of life for most Alaskan Athabaskans.” (p140).

When the story opens the two old women, Ch’idzigyaak and Sa’, have been cared for by their people for many years. It wasn’t all one way, in return for the help they received Ch’idzigyaak and Sa’ tanned animal skins for the others. But they did tend to complain, something that was not socially acceptable. And they didn’t really do their share, at least not as much as they were able. They had come to think of themselves as entitled to the care and attention of their people. When the people encountered hard times: a harsh  winter of deprivation and starvation, the survival of everyone was  threatened.  The tribal council determined to leave the old women behind; No-one spoke up for them.  The two women, deemed no longer useful, had become burdens their people were no longer willing or able to bear. They had  both witnessed this in their childhoods but had never imagined it  would happen to themselves.

As the rest of the tribe trudged away the women faced certain death. Fully aware of the impossibility of their situation they were despairing. Despair in that environment, well anywhere really, hastens death.  It was Sa’ who urged her companion to resist the apparently inevitable.

“Yes, in their own way they have condemned us to die! They think that we are too old and useless. They forget that we too, have earned the right to live! So I say if we are going to die my friend, let us die trying. (p16)

In the days and weeks that follow, the women draw on long forgotten knowledge passed on to them from their forebears and on skills they learned as children.  They read the weather and the land, observed the animals around them, remembered old stories and sought out old campsites. Their bodies screamed with the pain of movement as they struggled through the snow. They were hungry, they had no food reserves.  It would have been easier in some ways, and a lot less painful, to stay wrapped in their furs and wait for the cold to take them.

During the long lonely days without their people Ch’idzigyaak and Sa’ each examined how it was that such a fate had befallen them, a deep and honest reckoning with their past, with themselves, at what they had done to contribute to the situation, at the harshness of their people.

Eventually, summer came and they had plenty of food. But their fear of dying was replaced by fear that they might be found, that others might steal their food stores and their furs, leaving them abandoned and vulnerable once again. So they sought out a more remote campsite, one ridden with mosquitoes but one where they were unlikely to be found.

Two Old Women is a quick, easy read. But as is so often the case with legends its life lessons aren’t so quickly or easily learned.

It’s a commentary on the dangers of  ageism. Ch’idzigyaak and Sa’ had taken the easy road. Not only did their people see them as requiring care, they had allowed themselves to be cared for when they didn’t need to be.  The story has left me reflecting that, maybe, too much care is as much a problem as too little.

It is a story which reveals the great, yet unassuming, power of two old women who determine to work together for their survival. Amongst their people they had no power. Within themselves they discovered the sort of power that matters, and it  proved to be almost limitless.

Of all the lessons in this story, it is the courage demonstrated by the two women and then, later, by their people when they confront the consequences of their actions, that impressed me. Courage which in the end is tempered with compassion—the best sort.

Valma Wallis describes it as a humble book. Maybe. The  library copy is small, unassuming, the pages yellowing. It’s the sort of book it might be easy to pass over on the Library shelves. But those yellow pages contain an ancient story and a story of our times.

Claire at Word by Word  recommended Two Old Women to me when she read my  review of Tom Keneally’s  Two Old Men Dying. I’m glad she did.

Opening Sentence: The air stretched tight, quiet and cold over the vast land.