I have three travel rules. They’re simple, common sense even.

I know from experience, mine and that of other travellers, breaking them will likely lead to trouble; that or disappointment.

On the road, in Myanmar, I broke all three. Within minutes.

It had to do with soldiers. And guns. Automatic machine guns. For some of you, depending on where you are in the world, the sight of police or soldiers with guns won’t be unusual. I’m from New Zealand. Our police don’t usually carry guns. Tasers and batons, yes; guns, no. They have access to them but strict rules apply. And I rarely see soldiers except when they’re on training manouevres.

So, in Myanmar, that day, when we came to the check point and I saw armed soldiers (they may have been police, I don’t actually know) lining the road, I was watchful.

Our bus was waved on through. I assumed we weren’t who they were looking for. But, as we began to move again, one of those soldiers, the one with the hardest, meanest, darkest eyes I’ve ever seen, eyes that, no doubt, had seen things no human should, saw John and me. He shouted. A loud, threatening shout, easy to hear over the noise of the engine.

The driver braked. We stopped.

There was a burst of talk at the front of the bus between the conductor, the driver, and some of the soldiers. Actually,  it was mostly the soldiers doing the talking. Loud talking.

As for the passengers, babies were hushed and hush they did. All eyes were down. Except mine. And John’s. We were trying to work out what was going on.

I waited for the soldiers to come on to the bus. They didn’t. A good sign, I thought.

Then the conductor hurried down the aisle. To us.

Passports, he said. His hand extended.

And that right there was the first challenge to the most golden of my golden travel rules: Never hand over your passport.

Both  passports? I asked, meaning mine, too.

Yes, said the conductor. He added, It okay. A  comment I’d heard already this morning, about the motorbike taxi. And it was okay-ish.

The conductor was calm enough. As if this might be routine. Although, his eyes were wide, his nostrils a little flared. Worry kept under control? I wondered, feeling a little panicky myself. He was insistent: shaking his hand in front of us as if to say get a move on, you do not have a choice.

We gave him our passports.

The guns: that’s why.

It okay, he repeated. And then he disappeared, accompanied, escorted?,  by one of the soldiers to a hut on the other side of the road.

The seconds crept towards minutes. The quiet from the other passengers was unnerving.

Perhaps we should go after them, I said, trying and, I’m proud to announce, succeeding in keeping the squeak of fear out of my voice.

A suggestion which, from the safety of my writing desk now seems eminently sensible, even logical. But: soldiers with guns. And luggage.

Technically, we’d already broken that one. Our bags were stored several seats away, next to the spare wheel. The conductor said, when he took them from us, “They okay.” Pointing two fingers at his eyes and then at the bags, he added, “Me.”.

But now he was gone.

You stay here, said John. Keep your eye on the bags. I kept my eye on him as he walked across the road, purpose rendering him fully clothed once more. He walked past soldiers, lots of them, past one in particular.

He sat in a chair, in the shade of a tree (the fact he was sitting, I took to be a good sign) near the entrance of the hut. The fact he had a large machine gun laid across his knees I took to be a rather bad sign. The fact that he didn’t take his eyes off me, I took as a very, very bad sign.

I watched him right back, while trying to look as if this was all very, very boring. Trying to look as if I fully expected John, the conductor, and our passports to emerge from that hut any second, unscathed. That man, he, of course, knew exactly what was going on in the little hut with my husband, the bus conductor, and our passports. He also knew I did not.

Oh, how I longed to take a photo. Because that’s the third golden rule of travel: Photograph everything. Every Thing.

But not that day. I wasn’t giving “The Boss Man” any excuses to come near me. None.

I waited. Everyone on the bus waited. The silence deepened to a new, quieter level. I didn’t have to wonder what my fellow passengers were thinking. They wanted just one thing. To get on the road. To get away from here. To get away from trouble as fast as possible.

Bugger the bags, I muttered. (Yep, you can take the girl out of NZ but under pressure you can’t take the kiwi out of her, or her mouth out of the gutter.)  Clearly, John and the conductor needed help. My help. I’m pretty darn good at negotiating. Look at what I’d achieved earlier merely by pinching hold of a shirt.

The language barrier was no barrier to my mediation skills. And neither were those guns. As soon as it was necessary I’d be over there shooting all the verbal bullets I have in my arsenal. Yeah, that’d work!

I took a very deep breath, because, you know breathing’s important, and if you’ve been following this blog for a while you’ll know I always begin with that: breathing.

Yes, I would get off the bus. I would saunter, saunter, I tell you, over to the soldier in the chair, The Boss Man. I would raise myself to all five feet and a half inch, don’t forget that half inch because it counts, and I would in my strongest, unsqueaky and unterrified, voice say: My husband, please. And if “The Boss Man” didn’t understand my English, I would repeat it in French. French? Yes, French. Because I happen to know that phrase in French. Random, eh. But that’s life.

Burmese? No. I don’t know how to ask for my husband in Burmese.

With a picture of  “The Boss Man’s” immediate capitulation in mind (never make a move without envisioning a happy ending, right?) I was about to abandon our luggage and leap from the bus. I really, really was.  Why, I was rifling through my pack looking for my Wonder Woman suit (Okay, so that’s a lie!) when, John, two passports firmly in hand, followed by the conductor, emerged from the hut.

If a vehicle can sigh with relief, I tell you, our bus did. Along with every passenger, the driver and the spotter, (Wait, you don’t know what a spotter does? Oh, that’s a whole other story, I promise, I’ll tell it. I will, eventually.) and me.

John took his seat. The conductor waved the all clear to the driver and our bus trundled off into the traffic. 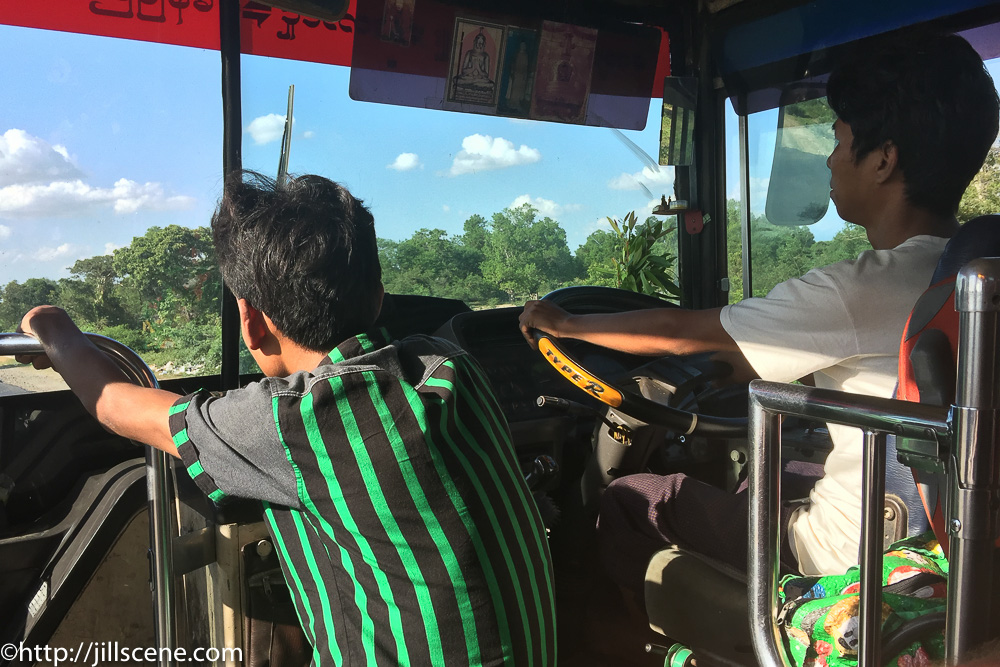 On the road again.

When we were on the road, again, passports put away, the check point and the soldiers far behind us, when the other passengers were back to chatting and sleeping and eating, then I asked John, So, what happened?

The long and the short of it:

There was a man in the hut. A soldier, his gun out of sight, with a pen. A soldier, unfamiliar with the English alphabet who, with John and the conductor watching, hand copied the details from the passports, forming each letter slowly and carefully, into a ledger. Ours were the very first entries.

What are your travel rules?
Have you ever broken them?