Handcraft is part of my family tradition. My grandmother was an expert needle woman, my mother could make her knitting needles fly, and I have several near impossible projects on the go. For me it’s a hobby rather than a necessity but it wasn’t like that for either my Mum or my grandmother. With their sewing and knitting they clothed their families. And they decorated cloths, napkins, and handkerchiefs with embroidery – transforming the ordinary into the beautiful.

Skilled as both my Nanna and my Mum both were the handcrafts of the women in Northern Laos left me awestruck.  (Sorry Nanna. Sorry Mum. But I think you’d have been the same  if you saw them. In fact, I don’t think it, I know it.)

Handcraft is an important source of income for many of the women I met in Northern Laos. They work at their needlecraft on the side of the road, in markets, at their front doors, or behind shop counters. (Like my Mum, their hands were never idle.) Much of what they produce is sold through shops or night markets, sometimes from their front door if they happen to live in one of the villages promoted to tourists as a weaving village.

A typical weaving village on the Nam Ou River

Whenever I came across women working I stopped to admire and, more often than not, buy a scarf or three, hand stitched bags, table runners, mats. Priceless treasures produced by women who were supporting their families with their earnings.

There’s also a lot of mass produced goods at the night market and the research showed that the stall holders realised tourists prefer locally made items.

The hand made articles, from scarves, to jackets, to intricate wall hangings, are often highly detailed and made according to traditions handed down through the generations. It’s produced with equipment which hasn’t changed much over the years.

Weaver and her traditional loom, photo taken near Luang Namtha

This woman’s hands flew over her loom, reminding me of the way my mother made her knitting needles fly.

The blur of fast moving hands.

The TAEC Centre, with its particular focus on traditional arts and crafts, was a must visit for me.

Founded in 2006, TAEC collects, preserves, and interprets the traditional arts and lifestyles of the country’s many and diverse ethnic groups. (http://www.taeclaos.org/ourwork.html)

When I visited in January the exhibits included a display of traditional clothing from Akha, (H)mong, Kmhmu, and Tai Lue ethnic groups. The detail in each of the garments was quite simply stunning. They take many months to complete.

This set of women’s clothing is from the Luma people, a sub group of the Akha ethnic group, from Phongsali, in Northern Laos. It blends traditional patterns and methods with modern threads and materials. 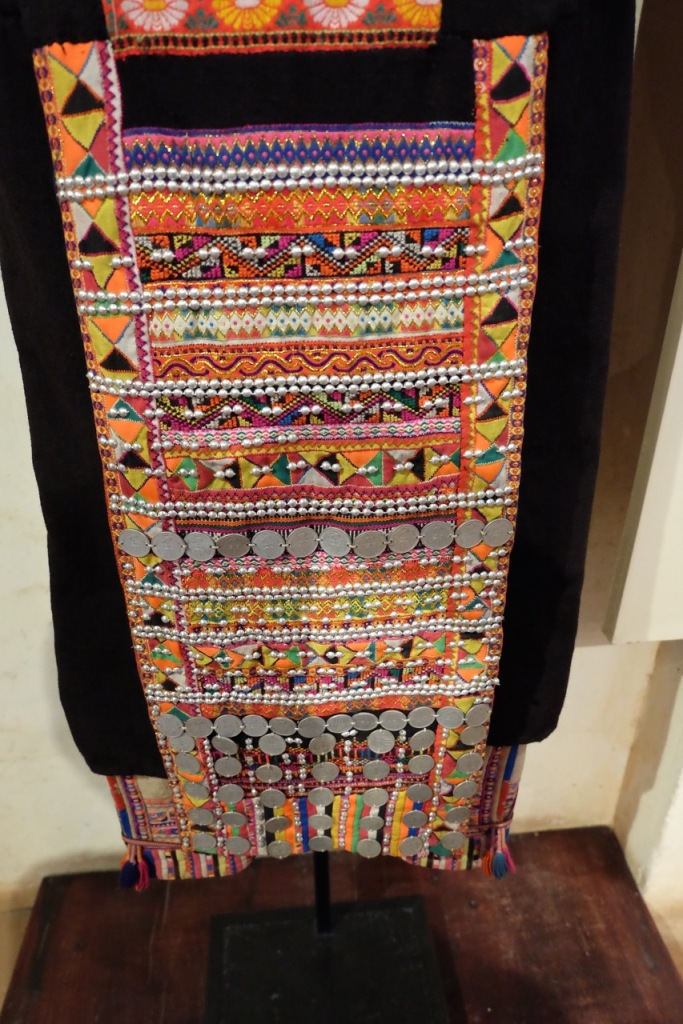 Detail on the front panel of a Luma woman’s skirt

The accordion pleats in this traditional Mong skirt are stitched into place and then the garment is stored while the pleats set. These skirts must be very heavy to wear! 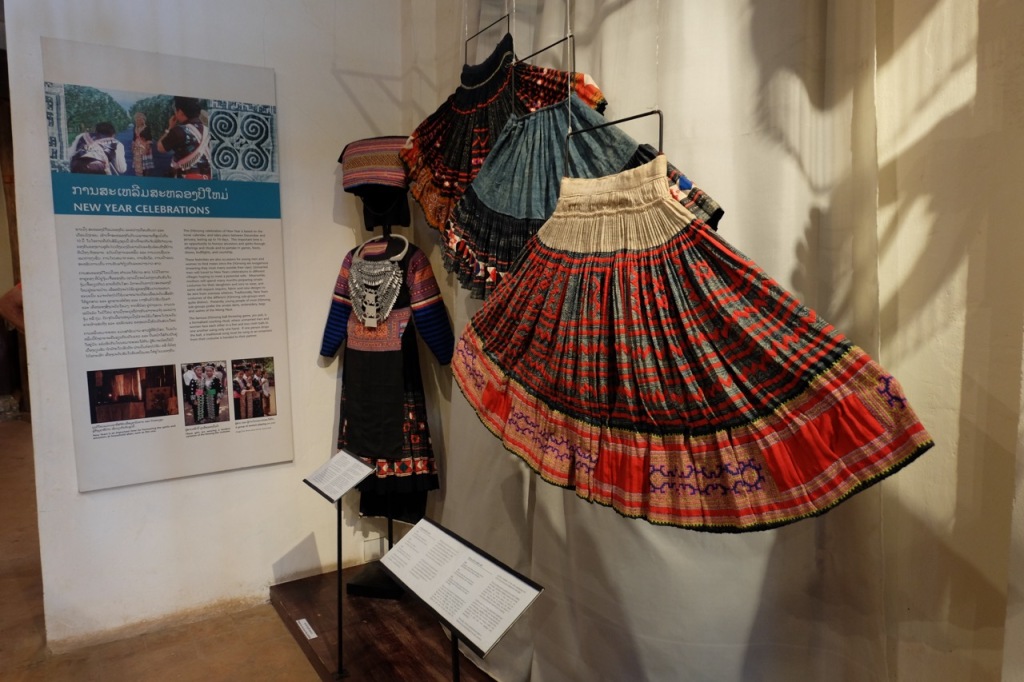 While we were in Phongsali and Luang Namtha provinces, in Northern Laos, I frequently saw women in traditional dress. However, they didn’t like to have their photos taken – a matter I’ve discussed in an earlier post.

The YouTube clip below is an interview with a craftswoman conducted as part of the research of  TAEC Centre. It’s fascinating viewing. The woman is in her late fifties and has more than thirty years experience. She designs and makes the patterns, all by freehand, for skirts similar to those in the above photo. The clip not only demonstrates how highly skilled she is, it also reveals, as is the case for many people in Laos, her precarious circumstances. She has worked all her life and now, without sons who will support her, she worries about getting enough food.

If you wish to know more about food insecurity in Laos this IRIN article provides an informative analysis of child and maternal malnutrition.

This post was developed in part as a response to The Daily Post’s weekly photo challenge: “Blur.”