Pak Beng gets a second chance

Pak Beng, a small town on the banks of the Mekong, in Northern Western Laos, did not make a good first impression. We traveled there from Luang Namtha, via Oudamxay, to catch the slow boat down the Mekong to Luang Prabang. It marked the beginning of our return home.

In the back of the tuk tuk, on our way from the bus station to our guest house, I looked across at John. His face was still very pale. What on earth are we doing here, I wondered to myself.

As we drove through the town there was nothing that appealed to me. Nothing. This place is a hole, I thought. And that thought is as uncharacteristic as my husband’s pale face. Right then a helicopter to whisk me to Luang Prabang and our flight to Bangkok seemed the only logical, if unattainable, next step. I’d had more than enough of travelling the adventurous way.

What went wrong, you might be wondering. You’ll know from my other posts that by now we’d worked out how the local bus system works. We were used to the cramped conditions, the lack of toilet facilities, roads more pot-holed than paved, taking an hour to travel thirty kilometres. And I’d come to enjoy, even love, the boat trips on the Nam Ou. Believe it or not, I’d been looking forward to our proposed trip down the Mekong.

When we left Oudamxay that morning things were unremarkable in a local, cramped bus kind of way. And they continued in that manner for the first three hours. But after two monks disembarked at a road side temple our driver suddenly had enough of taking his responsibilities seriously.

He cranked up the radio and wound up the speed. All good, I told myself, only a tad worried. At a stop approximately 45 minutes from our destination he accepted a large glass of beer, skulled it sitting in his seat, and handed the glass back through the window. It’s only one beer, I reasoned. Thirsty work, driving a bus, said John. And it was only the one glass. The driver drove faster.

At the next stop, he hopped out of the bus, joined a party in the local bar and skulled two more glasses of beer Laos.

John checked his GPS, it was 15 kilometres to Pak Beng. Not that far.

As any drinker will know, it takes a few minutes for alcohol to have its effect. And have its effect it did. As we passed the site of a new dam our driver played chicken with a concrete mixer. Believe it or not the concrete mixer moved to the side of the road. Then it was skittles with pedestrians – they scattered in every direction. Our driver was a man in a very big hurry. Now, at each village, instead of slowing down, he sat on his horn warning every one else to stay out of the way. They did.

My intrepid husband’s face turned white with a greenish tinge beneath his eyes. More than anything else this confirmed we were in trouble. Big trouble.

I prayed the prayer of the truly desperate: Jesus help me! When I wasn’t praying I reminded myself I signed up for adventure. If the worst happened I was, at least, out and about exploring the world and living life. Funnily enough, at the time, this notion wasn’t much comfort.

I think we should get off, John said. I wondered how and when. It didn’t seem sensible to announce to a crazed driver, a driver who was driving as if he had nothing left to lose, that we wanted to disembark.

Our bags were on the roof of the bus. It’ll mean leaving them behind, I thought. Worth it, I thought.

We’ll have to walk, said John. Unappealing in the heat of the day. But a lot more appealing than the visions that were flashing in front of my eyes.

I checked out our fellow passengers. We were the only foreigners. No-one spoke English and we don’t speak Laos. They were quiet. None of them met my eye

Suddenly, the bus lurched onto two wheels, bounced off the road, over some large potholes and came to a halt.

The small dirt clearing was in fact the bus stop. A tuk tuk was waiting. The young driver looked as shocked as we felt. There was quite a discussion between him and the bus driver. Money changed hands. A regular payment? Perhaps, but I doubt it. We paid the usual fare into town.

As we drove into Pak Beng, I saw nothing to redeem the place. The road seemed steep, the tuk tuk lurched slightly and I clutched on to the railing, expecting the worst. The restaurants looked dingy and shabby, the shops uninviting, or so I thought. Even my first glimpse of the Mekong in several weeks didn’t appeal. Dirty, I reckoned. And worse, our tuk tuk driver had never heard of our guest house. The promises from Agoda.com of a large bed, crisp linen, a spacious ensuite, free wifi, and a balcony view of the mighty Mekong, now seemed unreliable at best.

But sometimes, sometimes, after the terrors that occur in life, the God’s do smile, prayers are answered. We spotted our guest house, alerted our driver, and he pulled the tuk tuk over to the side of the road in a very calm and steady manner.

The guest house was indeed over looking the river. 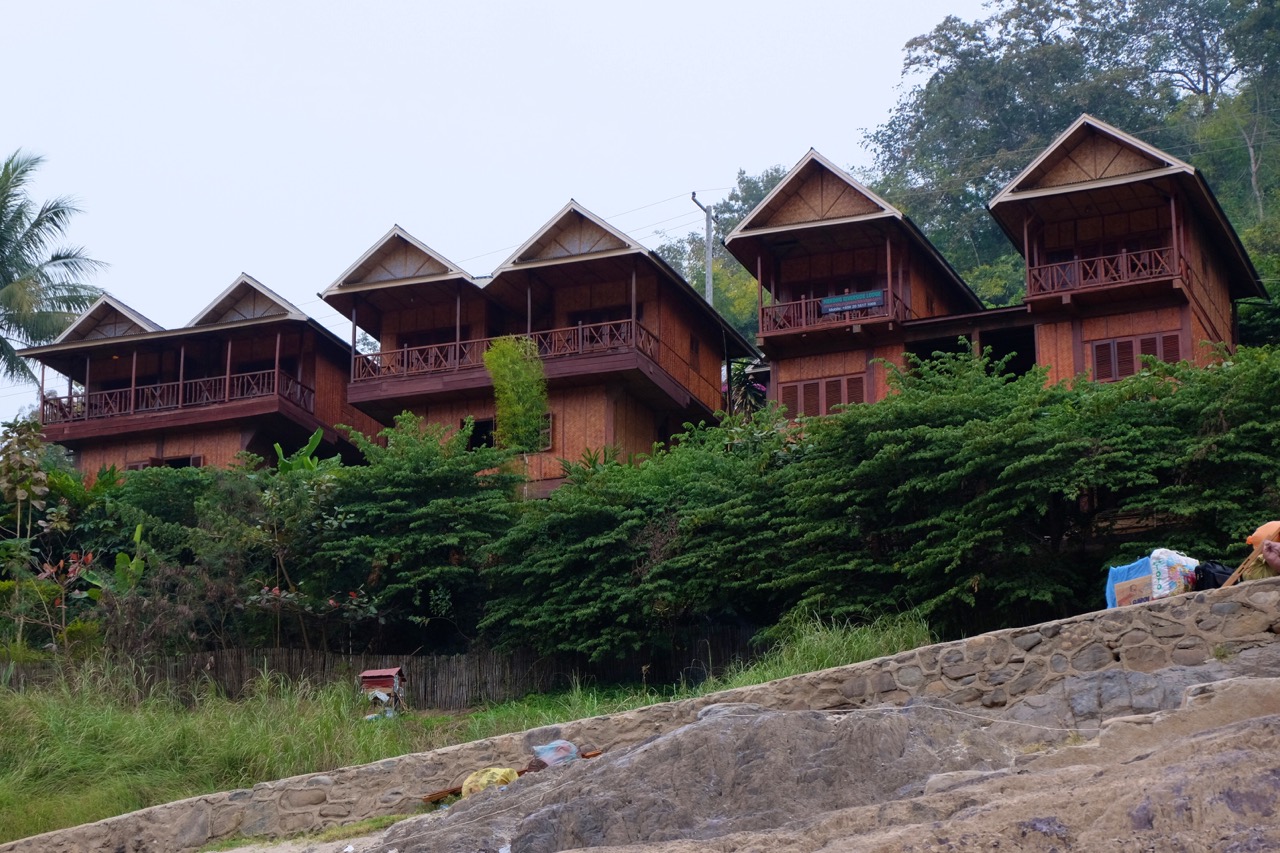 It was comfortable, smart, even flash, and very, very clean. The garrulous owner showed us to our room, made us a curry, served us endless cups of tea. Funnily enough neither of us wanted a beer Laos. Soon enough the horrors of that last half hour on the bus faded.

Later, we sat on the balcony, looked out at the river, watched the boats begin to arrive. and decided then and there to stay another night.

View of the Mekong from our guest house in Pak Beng

Everything is carried off the boats by hand, including those mororbikes. 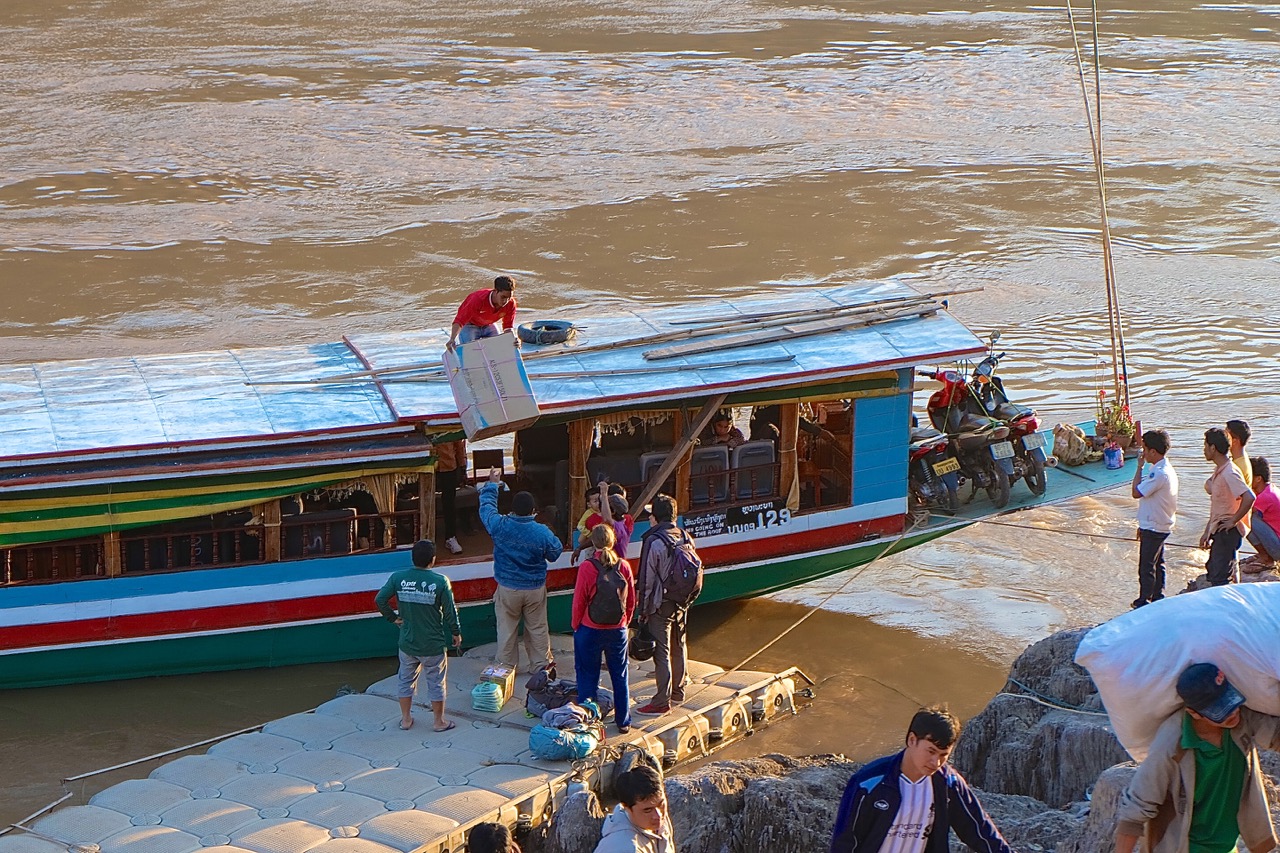 By sunset there were at least double this number. 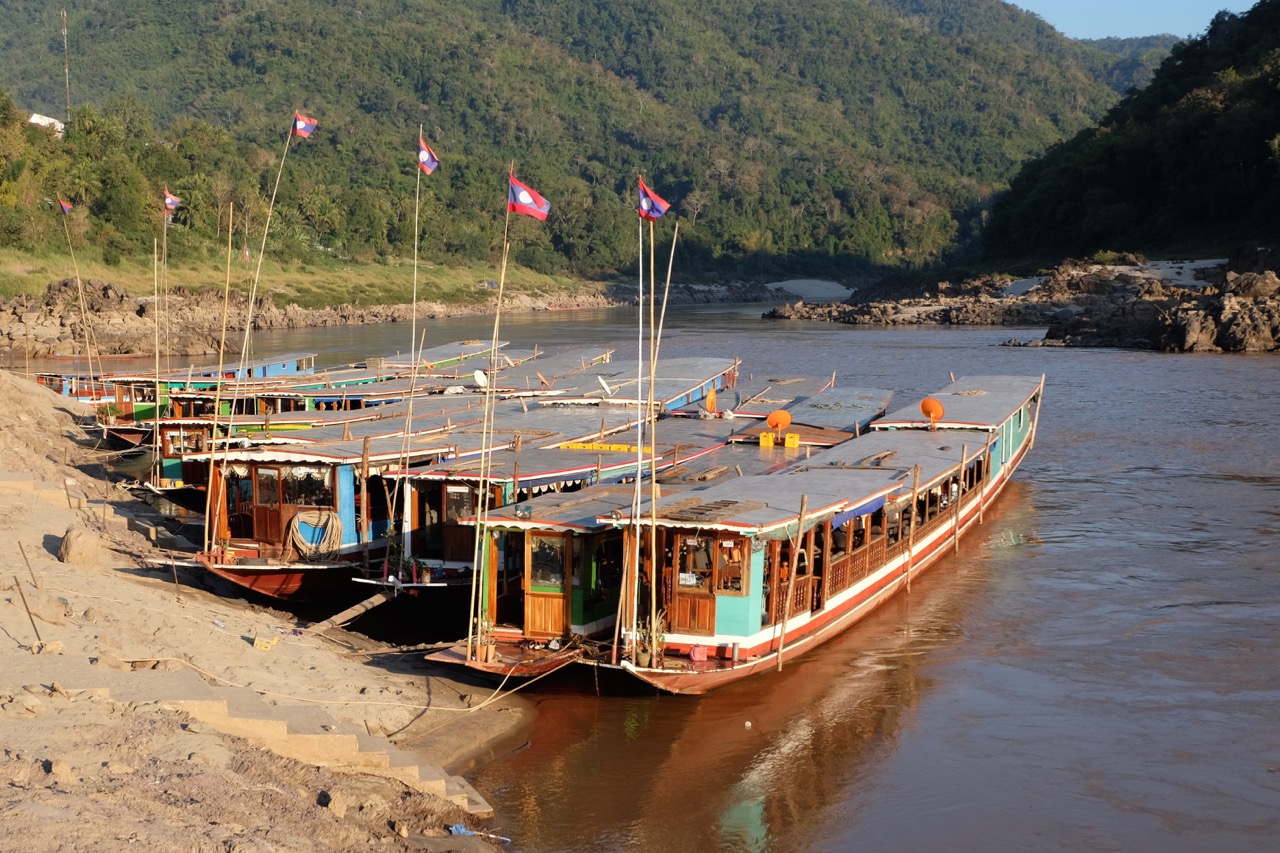 The slow boats at Pak Beng

Sunset over the Mekong at Pak Beng

What a great decision staying another night  proved to be.

Pak Beng is not the horrid hole that, in my adrenalin fueled reaction, I’d thought. It’s beautiful. Quiet. The people friendly. The food good, very good. There were plenty of restaurants and bars to choose from. And during the day we had the place  pretty much to ourselves. We whiled away a couple of hours in this family owned bakery.

The best bakery in Pak Beng

Their pastries were delicious! And the pineapple fruit shake hit the spot. That’s the grandfather sitting at the front of the shop. He’s watching over his grandchild who was sleeping near the counter. We went back, twice.

Most tourists arrive in Pak Beng by boat in the evening and leave early the next morning. (We still haven’t met any who caught the local bus!)

They get the impression there isn’t much to Pak Beng other than a strip of bars and restaurants. They take an even dimmer view if the power fails which it did on our second night. The more fortunate restaurants have generators and for them business carries on. The smaller places simply have to wait until the supply is re-established.

The longer we stayed the more entranced we both became.

The main street of Pak Beng 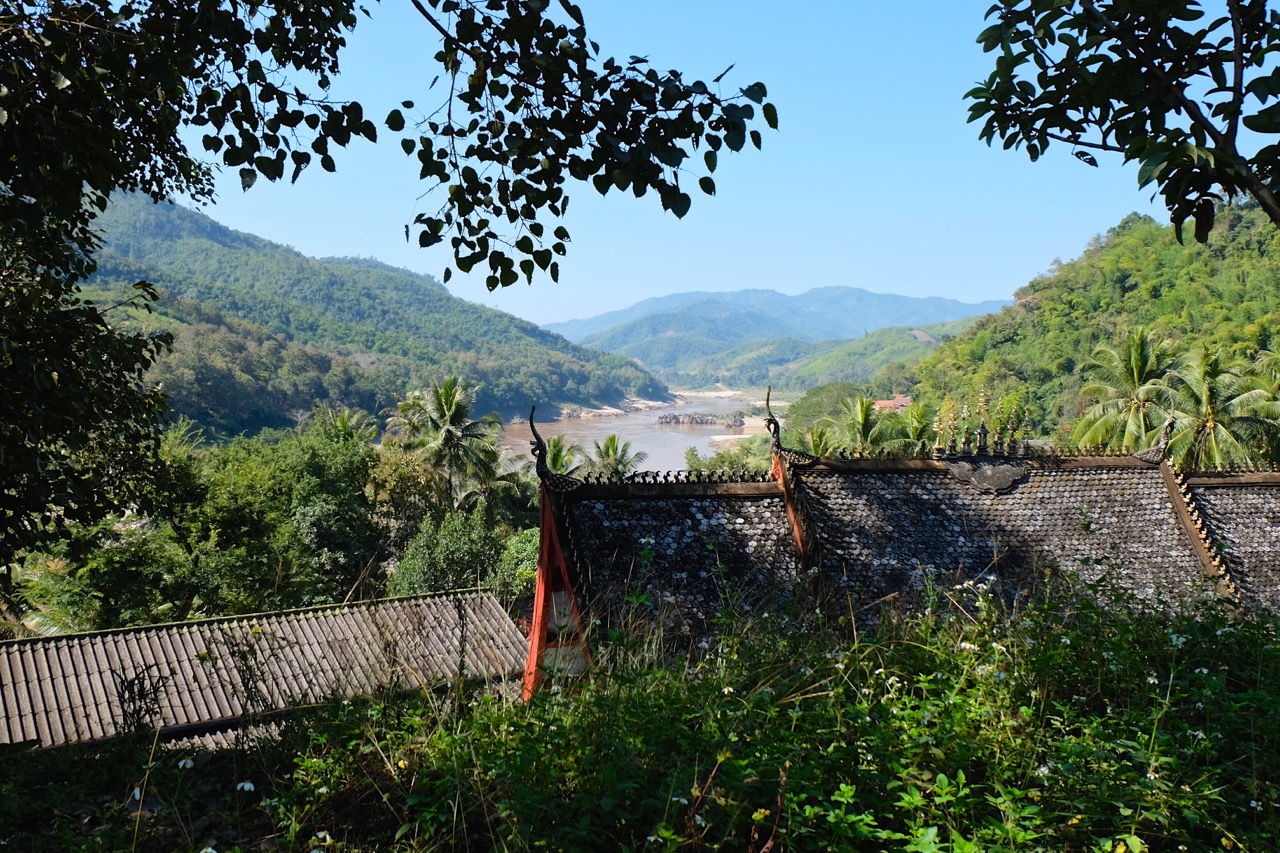 A Wat in Pak Beng

John wandered further afield than I did and came across this incredible scene.

Elephants about to be loaded on to truck 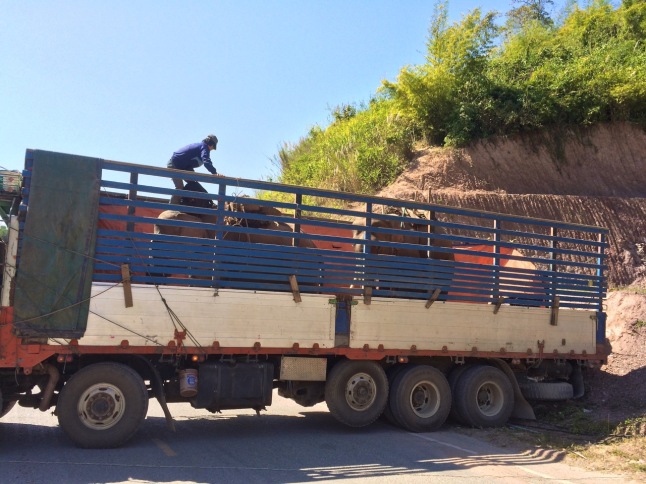 I was more than a little bit jealous because I hadn’t seen any elephants on our trip so far. The truck blocked the road until the elephants were loaded. (John kindly allowed me to use his photos for the blog.)

We would have stayed in Pak Beng a third night very happily but unfortunately our guest house was booked out. It was time to catch one of the slow boats to Luang Prabang. The bus trip was a distant memory and I was ready for another adventure.

For any worried travellers out there, we used local transport for nearly all our travel around Northern Laos and this was the only risky situation we encountered. All other drivers were focussed, attentive, and concerned for their passengers.