The mighty Mekong and me

In which boating gets a little more adventurous than was intended, or perhaps it’s time to rename my blog “The trials of a timid traveller”

Why not, I thought. Well, actually, if I’m an honest blogger I could think of several reasons why not, such as:

What could go wrong, John and Ben said.

Any manner of things I thought, like hitting a rock or a log, or falling off the gang plank. Because gang planks and me, we don’t mix, at least not readily. But there’s one thing much worse than all these possibilities and that’s the risk of missing out on an adventure so I kept my thoughts to myself – mostly.

The walk down the path to the boat was manageable if very slippery.

Even the gangplank was doable, if slightly worrying. It was slick with rain but I’m travelling with two gallant men and I didn’t fall in!

Six to a boat they said. Yep, it was smaller, much smaller, than I’d hoped for.

Nothing to worry about, Ben said. The boats go up and down the river all the time and the boatmen know what they are doing. They do it all the time.

My backside adjusted to the hard wooden seat – it went numb. But I didn’t really notice. I was too busy taking in the views and giving myself a big pat on the back for not letting worry cheat me out of fun. The guys were right, I thought, what could possibly go wrong. We might be a long way from home but we weren’t exactly isolated. There were at least ten other boats all headed to the caves.

About half an hour into the journey, not far from our first stop, the village of Ban Xang Hay, there was a grinding sound. Nothing too serious, I told my self. Maybe the river is a bit shallow here – we were  travelling close to the bank.  But I did notice a quick look of concerned alarm from Ben. An are you all right, Mum? kind of look. I smiled confidently, after all, what could possibly go wrong!

A quick check of the boat, completed in a carefully lackadaisical manner (I hope) confirmed all was okay. We weren’t taking on water and our boatman appeared calm. The grinding sound happened again, this time the stink of diesel was overpowering.

What could possibly go wrong? Nothing of course, I told myself, again. Until the boatman switched off the engine. I was beginning to question the wisdom of the “power of positive thinking” theory. (Okay, okay, maybe not for the first time in my life.)

Another boat pulled up alongside. The two drivers had a brief, and surprisingly calm, discussion. Our boatman announced, “Boat Change” – as if this was all in a day’s work. Which it may have been for him but isn’t for me, but then you’ll have guessed that all ready.

Change Boats!! How was that going to happen? Without me falling in. I had visions of me floating away down the river, arm in the air, calling for help. No, actually I saw myself in the drink, floundering in my plastic poncho which served as a raincoat i.e. in trouble, big trouble. But before I had time to get the thing off, ready for my inevitable dunking, the two boatmen aligned the boats, held them steady and I’d safely stepped from one boat to another. Having done it, I’d say the chances of falling into the river at that moment were, believe it or not, approaching zilch.

It was plain sailing after that. And by the time we reached Ban Xang Huey I’d almost forgotten our mid-course boat change. The village is promoted as the Whiskey Village. (John had actually cycled there the day before, in pouring rain and brought home a sample of  Laos Laos whiskey – fire water like no other. (I could only manage a tiny sip.) I hope it didn’t come from either of these bottles.

Yes, that really is a monkey in the jar.

After a few minutes it was time to face the gang plank, again. 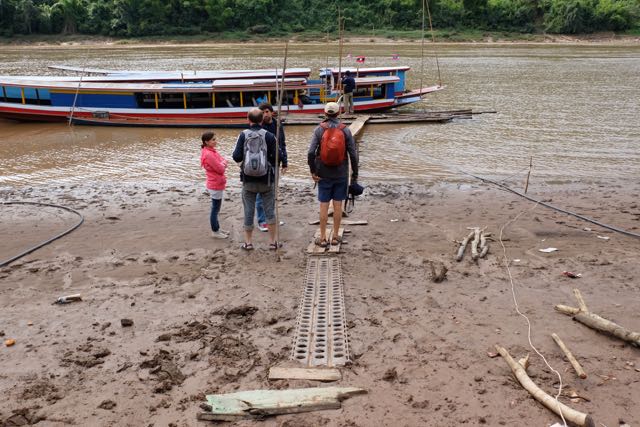 At least the gangplank was dry this time

The remainder of the trip to the caves would have been perfect, for me anyway, if I hadn’t spotted this!

I hope this was simply the consequence of a broken mooring.

There are two caves at Pak Ou  open to visitors. The upper cave is up some steep steps and worth the climb. Actually, the exercise helped to get the circulation going again. The lower one opens almost directly to the river. They’re both packed with thousands of Buddha images. By the way, Pak Ou, means mouth of the Ou river.

And, very popular with visitors

Despite the worries and the drama, was it worth it? Yes, and yes, again. This day was a highlight in a trip that so far has been full of highlights. 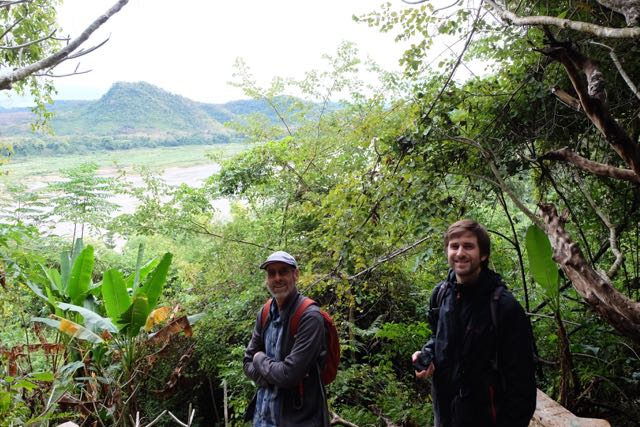 My face was shiny, too, and that’s the truth! But no photo to prove it. Since then I’ve completed a full day trip on the Nam Ou river (post still to come) and may even travel to Muang Khua, further up the Nam Ou, by boat.

But somehow I don’t think I’ll ever be as comfortable on the water as these young lads. 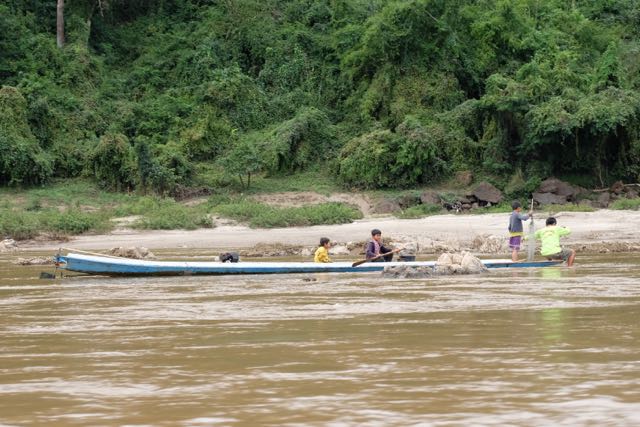 Raised on the water