Vang Vieng to Luang Prabang – a road trip like no other

Pick-up is at 9:30am the hotel receptionist told us. And, being the obliging sort, we were ready and waiting for the shuttle bus at 9:20. We whiled away half an hour watching the builders across the road. They were putting up the framing for a new house – no scaffolding, no ladders, and no cranes. But by 10:00am we wondered if we’d been forgotten. After a couple of phone calls the receptionist said the shuttle was only a few minutes away. She assured us we hadn’t been forgotten. She said sometimes the bus runs late. She also said she had only ever been to Luang Prabang once in her life, and then only for a day. I wondered why. 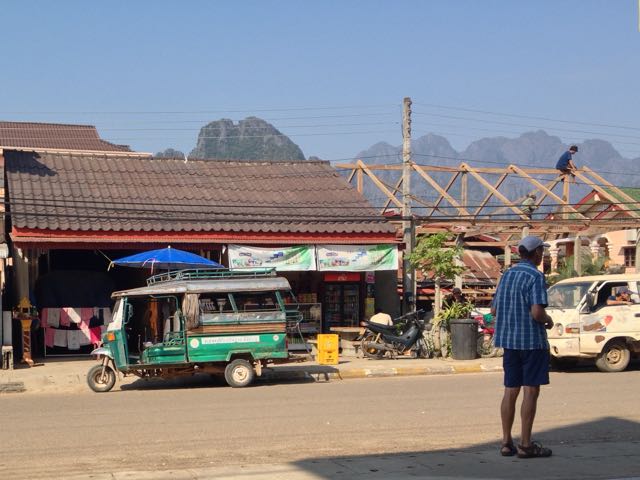 At 11:00am a small bus pulled up, the driver barked Luang Prabang. He was a man in a hurry. We clambered on, dragging our luggage with us. I claimed a spot on the bench seat that ran down the side of the bus – no orderly rows here. No air-conditioning, either, and the windscreen had a large crack that ran from one side to the other.

We pulled into a bus station. But it wasn’t the station with our VIP bus. There was a lot of talking between our driver and a woman who may have been his boss. The talking turned to shouting. And then she punched him on the arm – hard. To our driver’s credit he didn’t hit her back but neither did he cower. There was more shouting, a lot of gesticulating and I thought our driver might get hit again.

Amongst the passengers there were raised eyebrows, shuffling, a shared sense of unease. I may have been heard to remark I didn’t fancy being driven anywhere by an angry driver. One young traveller sat through the episode his eyes glazed, his face blank – he was on an entirely different sort of trip.

The driver got back on board, said nothing to us, started up the engine and pulled out on to the road. And failed to look for other vehicles. Fortunately in Laos there isn’t a lot of traffic, it’s usually slow moving, and generally everyone is looking out for everyone else.

There was one more unexplained stop. Our driver left the bus idling, us all on board, while he went into a ticketing office. There was more arguing, counting of money, and more gesticulating but no hitting. Eventually he returned and at last we were delivered to the VIP bus and we were on our way!

I expected the road to Luang Prabang to be hilly, I expected it to be winding and narrow. And I’d been in Laos long enough to anticipate potholes. I wasn’t worried. Not at all. I’m from New Zealand – a country infamous for its narrow and winding roads. Why, at airports we even have large signs warning tourists to drive slowly and allow extra time for their journey.

The first two hours passed comfortably enough. Yes, there were pot holes and yes progress was slowish but it was steady. At our first stop we tucked in to a late lunch of rice cakes and sweet bread filled with pandan custard while the driver was busy working on the bus.

I wandered out to the road.

Those hills in the distance – that’s where we were going. And I have to tell you – they are mere foothills to those we eventually passed over. No photo can do justice to the enormity of the mountains and the deep valleys that we wound our way through. It was like  a journey on an endless Devil’s Elbow. Except each hairpin bend was tighter and longer than any I’ve been on before. The drop from the edge of the road to the valley floor was vertiginous – often at least 1500 metres. The strain on the brakes and the clutch and everything else in our rather run down VIP bus was enormous, the pot holes axle breaking. The care and skill of our driver (not the shuttle bus guy) was reassuring – he negotiated his way around many of the pot holes. It was lucky I wasn’t the driver because there were parts of this road where I had my eyes closed and my fingers crossed.

The view from our second stop – four hours into the journey.

Not all vehicles make it through. We passed a broken down bus. The passengers were gone, the driver still there – waiting for the repair truck I suppose. And we inched past a truck that had ground to a halt in the middle of the road. There was no berm for it to pull on to. The driver was cooking his tea on the side of the road while he waited for help. I hope he didn’t have to wait long, it was very cold up in those mountains.

Along the way we passed many small villages, the houses built of woven walls and thatched roofs and balanced on stilts over the edge of the cliff – the typical homes of hill tribes. Some newer homes were made of concrete brick and corrugated iron. Families were washing in rivers, or beneath a pump at the side of the road, chickens and dogs roamed through the yards and the houses, children ran about freely at the very side of the road, some stared impassively at the bus, sometimes a young child waved. I wondered what they thought as we went  past in the big bus, on our way to some far off place.

If you ask Google how long from Vang Vieng to Luang Prabang it will tell you 2 hours and twenty eight minutes. Not an unreasonable guesstimate, one the unwary might rely on – it is only 187.4 km. 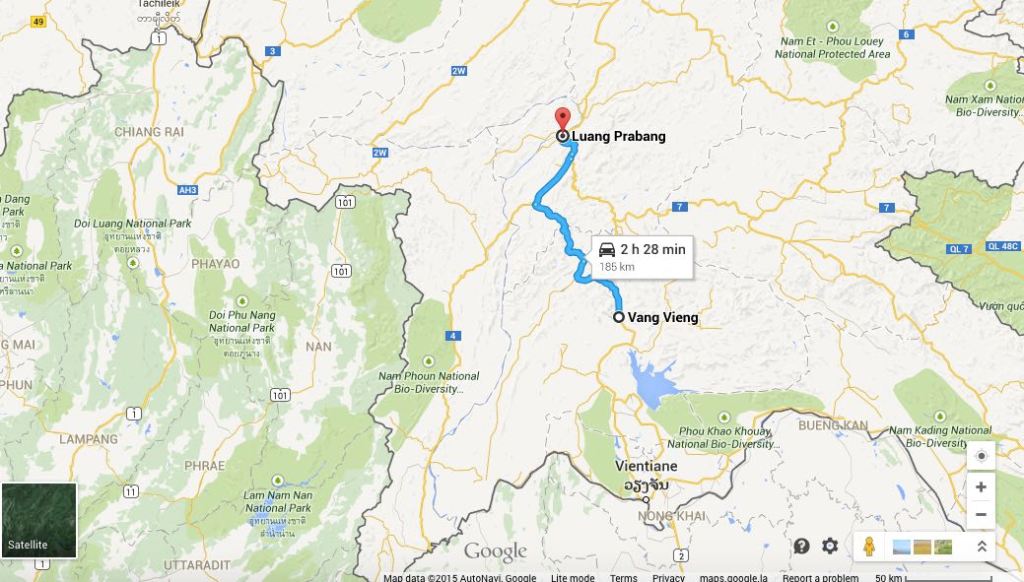 But in this case Google is wrong. Very wrong. The Lonely Planet estimates between six and eight hours. Our trip was seven hours from the time we finally set off in the VIP bus until we arrived at Luang Prabang bus station.

No wonder the hotel receptionist in Vang Vieng has only travelled to LP once in her life.

Our reward at the end of the day, apart from being lucky enough to do such things, was Som Vang Khilly Guest House. I reckon it has the largest and softest beds in Luang Prabang. And was I pleased to be able to sink into that mattress.

Back on the treadmill cos some things about Christmas and New Year in Aotearoa shouldn’t be unstoppable! Keep scanning those covid QRcodes though, please, everyone. #unstoppablesummer
My most like posts from #2020
A stormy couple of days #wildweather #ōtakibeach
Moody spring #ōtakibeach #birdonthewing #variableoystercatcher #tōreapango #iphonography
Freedom! #alertlevel2 #ōtakibeach #covid19
It’s been 49 days and tonight at 11:59 pm New Zealand’s team of five million moves to Alert Level Two.. Yesterday, right on cue, this glorious creature emerged. She’s in no rush to be on her way - she’s still here today but looking stronger. She’ll be on her way tomorrow. #washyourhands #teamoffivemillion #kiakahaaotearoa #covid19
Loading Comments...
Comment
×
%d bloggers like this: