I’d like to see some monkeys, not in the zoo, roaming free, I told my son during my visit to Thailand in 2013.

Lopburi is the place for you, he said.

At 150 km from Bangkok it’s an easy day trip. But if you want to stay longer there’s plenty of accommodation. And there’s thousands of monkeys. The Macaques have the run of the old town.

They’re revered and they’re cunning; more cunning than me. And they knew it!

I’d been in town an entire half an hour. It was hot. I was hungry. A street vendor was selling the sweetest, reddest, juiciest watermelon I had ever seen or tasted.

There were monkeys everywhere and I kept my eye on them while I took my first bite. But I don’t have eyes on the top of my head and, before I could swallow my first yummy morsel, a monkey leapt from the roof of a building on to my back. I’m relatively small, the monkey was relatively big. It was heavy, it was warm, and it smelled like dried dung. I got a bit of a fright, the monkey got my watermelon, and I was too flustered to get photos of the thief. Not that anyone would have taken my case. The monkeys really do have the run of the place.

Only tourists are silly enough to eat on the street in that part of town. Believe me, this silly tourist only did it once.

So during our tour of the ancient temple Prang Sam Yot I was glad that this  old geyser was on the other side of the bars. He was huge. I suspect he was the patriarch.

No, he wasn’t in a cage. I took the photo from inside the temple. Our guide said the bars were to protect this ancient Buddha. 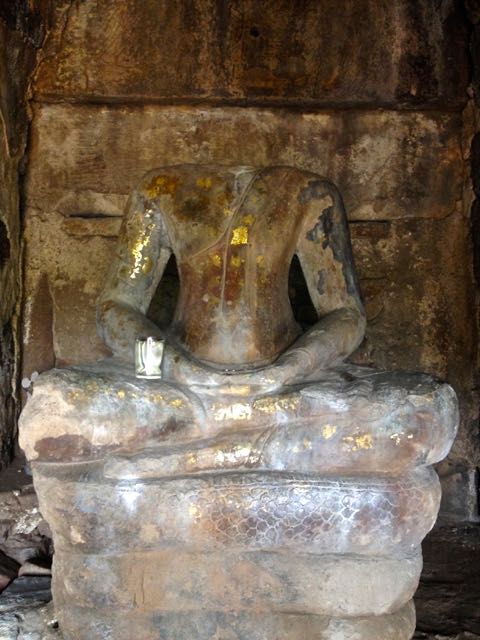 Outside the temple building the monkeys roamed free.

For more travel tales on the theme of freedom visit  Where’s my backpack.

Up close and personal in Bangkok